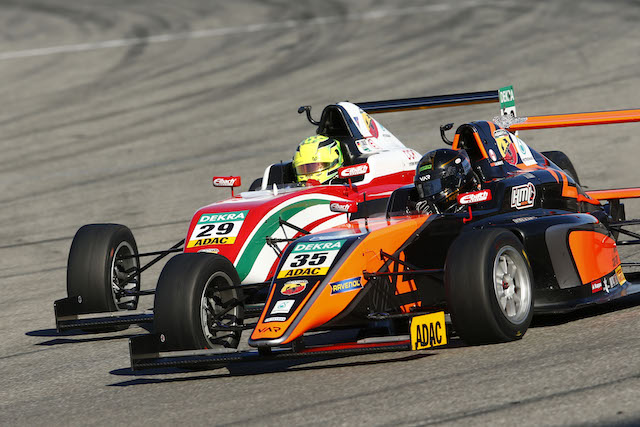 Laliberte made a great start from third on the grid and took the lead from reverse-grid polesitter?Kim-Luis Schramm exiting the hairpin on the opening lap – although he did go off track to do so.?Behind, Schumacher (who started from fifth) grabbed third place from?Simo Laaksonen,

Schumacher’s chance to take second from Schramm came after a safety car necessitated when the man that beat him to the title in race one of the weekend -?Joey Mawson?- was sent into the gravel at Turn 2 with broken suspension by contact from?Lirim Zendeli as they fought over eighth.

As Schramm challenged Laliberte at the restart, Schumacher capitalised to grab second at the Mercedes Arena and very quickly caught the leader, having a look down the inside at the penultimate corner.

There was then a lengthy second safety car period when?Oliver Soderstrom and?Robin Brezina collided at the final turn, which preceded an amusing moment as Brezina chased the Swede out of his car and through the gravel trap.

After the restart, Laliberte held on until the final lap when Schumacher managed to find a way past.

That move?made a huge difference in the teams’ title, meaning that?Schumacher’s Prema team beat?the Van Amersfoort team of Laliberte and Mawson by just 4.5 points, helped also by?Juri Vips?coming?through to third from eighth on the grid.