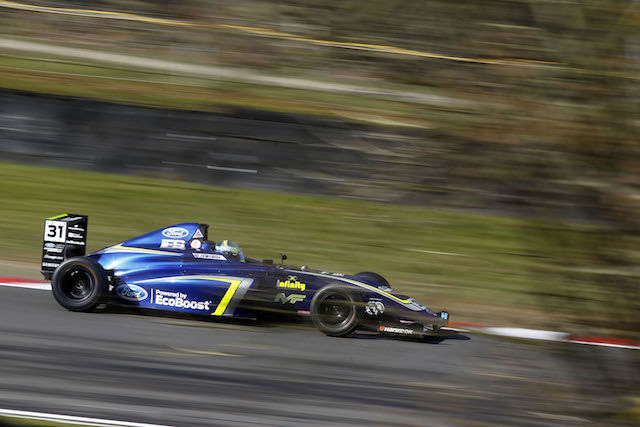 Max Fewtrell has claimed the British Formula 4 title, defeating?Sennan Fielding with victory in the final race of the season at Brands Hatch.

Fielding had extended his advantage to five points by overtaking Fewtrell for second place at the end of?race one, but that was cut back to three in the reverse-grid race two, where Fewtrell climbed to third, two places in front of Fielding.

Fewtrell was then able to start race three from pole courtesy of his double-pole qualifying performance, while Fielding had to come from sixth on the grid.

Carlin driver Fewtrell, in his first full season of single-seater racing, made a good start to retain the lead ahead of?Ayrton Simmons, but Fielding – a relative veteran but driving with the small JHR outfit – charged his way up to third and within seven tenths of the leader inside?the first four laps.

Fewtrell, 17, could never break away from first-time podium finisher Simmons, but Fielding, 20, was?unable to?find a way past the Arden driver.

James Pull finished the race in fourth, but fifth for Luis Leeds was enough for the Australian Red Bull junior?to keep hold of third in the standings ahead of the Singaporean-born Brit.

Devlin DeFrancesco scored his first points of the weekend in seventh behind?Zane Goddard, passing?Petru Florescu to ensure he finished the season fifth ahead of the Romanian.

Ninth was?Jamie Caroline, the 2015 Ginetta Junior champion?having scored a long-awaited first win of the season in the reverse-grid race two, dominating it from pole ahead of Florescu and Fewtrell.