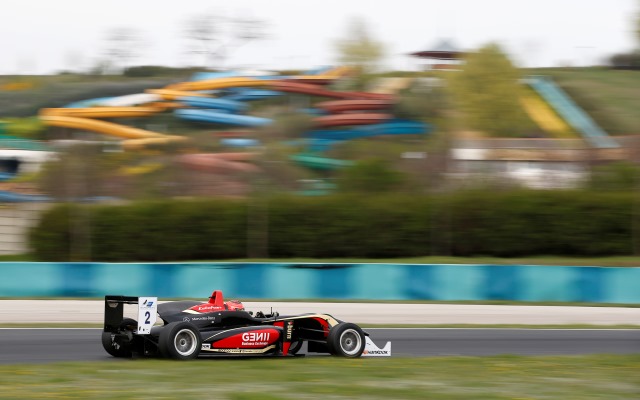 The 17-year-old Frenchman was the only driver to dip below the 1m37s mark in the first of the 40-minute sessions, putting him 0.255s clear of second-placed Tom Blomqvist. Blomqvist lies second in the standings, 57 points adrift of Ocon.

Max Verstappen was third in the first session ahead of Italian duo Antonio Fuoco and Antonio Giovinazzi with Jordan King completing the top six.

The opening session was ended early after contact between Sean Gelael and Lucas Auer, who ended up 11th and 13th. Auer was forced to sit out the second session as a result.

Ocon lowered his own benchmark to a 1m35.801s in the second session. Second was Felix Rosenqvist, 0.224s slower. The Swede, who scored a long-awaited first win of 2014 in the Pau Grand Prix, had been 14th in the earlier session.

Fuoco was third ahead of Blomqvist, Verstappen and the impressive Menezes. King and Giovinazzi were next, with Dennis van de Laar ninth and Gelael tenth.

The grid has been reduced to 25 drivers this weekend due to the injury of Carlin driver Ed Jones and a split between EuroInternational and Riccardo Agostini. The Italian squad are only fielding Michele Beretta this weekend, but are set to have Santino Ferrucci join them for Spa once the American turns 16.