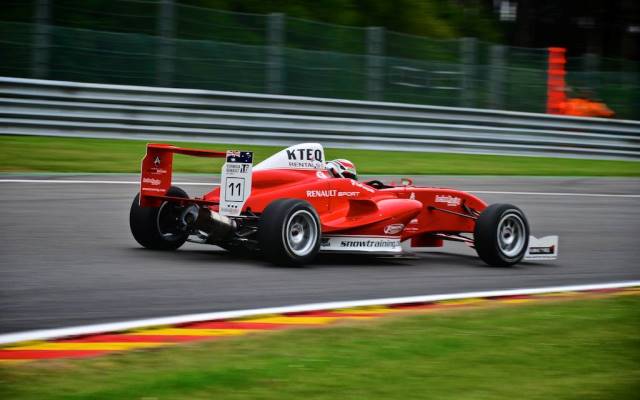 Anton De Pasquale picked up where he left off at the opening round of the 2014 Formula Renault 1.6 NEC season and dominated the two practice sessions at Spa-Francorchamps.

For this weekend the series, boosted by Formula Renault 1.6 Nordic regulars, will join the World Series by Renault event in Belgium.

In the morning session, which was mostly led by ADAC Karting champion Marcel Lenerz, Australian De Pasquale took the lead with a last-minute lap, edging Lenerz out by three tenths.

Dutchman Janneau Esmeijer, who spends his sophomore season in the series, ended up in sixth with the rest of the top ten completed by Pontus Fredricsson, Ferdinand Habsburg, Paul Blomqvist and Simon Mirguet.

The afternoon session was a complete Lechner Racing lock-out with the Austrian team’s cars filling the top four. De Pasquale comfortably took the lead at the early stages of the session and by the end only Janits and Defourny were able to finish by less than a second slower than the Australian.

Habsburg finished fourth, while Lenerz and Larry Ten Voorde seem to be the only challengers for the Lechner drivers as they ended up in fifth and sixth respectively.

Estonian Ralf Aron took seventh, closely followed by Cedric Piro, who improved a lot after a difficult morning session. The top ten was rounded out by Esmeijer and Lappalainen.