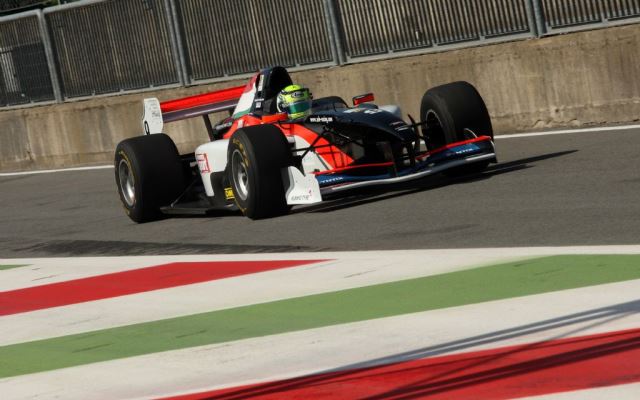 Tamas Pal Kiss and Andrea Roda led the way in the two practice sessions ahead of the fourth round of the Auto GP season at Monza.

Kiss, who can take the championship lead this weekend in the absence of Kimiya Sato, set the best time of 1m37.059s during the first session.

The Zele Racing driver was 0.443 seconds quicker than second-placed Roda of the Virtuosi team.

Michela Cerruti, a race winner at Monza in the Superstars touring car series in 2011, was third for Super Nova, 1.21s off the pace and just 0.022s ahead of team-mate Markus Pommer.

Debutant Shinya Michimi was fifth, one tenth ahead of fellow Japanese Euronova driver Yoshitaka Kuroda, with Kevin Giovesi down in seventh for Eurotech.

Roda was quickest in the second session, but more than six tenths of a second slower than Kiss’ earlier benchmark.

Von Grunigen improved to take second, just 0.153s off the pace and one place ahead of two-time 2014 pole-sitter Giovesi. Kuroda and Michimi were fourth and fifth respectively with Kiss in sixth.

Cerruti and Super Nova-returnee Francesco Dracone were seventh and eighth respectively with La Rosa and Loris Spinelli completing the top ten. Pommer failed to set a time due to a car issue.