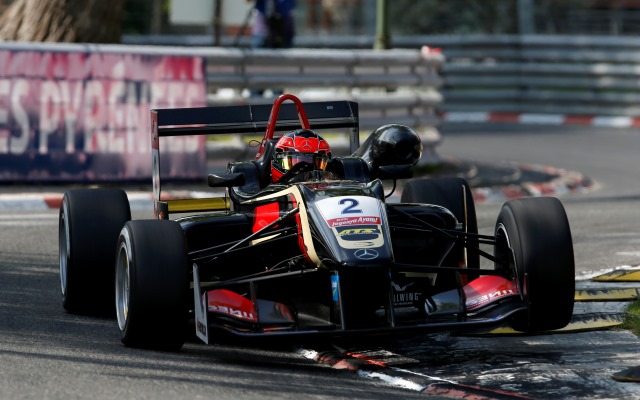 Esteban Ocon has given himself the best possible chance of a triple victory in the FIA F3 European Championship on home soil at Pau by claiming pole for both of the Sunday races in qualifying two on Saturday afternoon.

The ‘Group B’ fight between race one winner Ocon and fellow rookie Max Verstappen went first on track this time, with Ocon coming out on top by 0.057 seconds.

After Lucas Auer had taken the fight to the rookie pair in first qualifying, it was his Mucke Motorsport team-mate Felix Rosenqvist who led the challenge in Group A on this occasion. The Swede was 0.350 seconds clear of his nearest rival Tom Blomqvist, but fell five thousandths of a second shy of Ocon’s benchmark to steal away pole position.

Ocon and Rosenqvist will form the front row for both race two and race three, the latter based on second-best times. Row two will also be the same for both races, with Verstappen third and Blomqvist now finally free of his trio of ten-place grid penalties for his Hockenheim engine change.

Jake Dennis continued his fine form to finish best-of-the-rest behind Ocon and Verstappen in the first session, securing fifth on the grid for both races after his fourth-place finish in the first encounter.

Antonio Giovinazzi was third in the second session to take sixth on the grid, but was ranked behind Mitch Gilbert and Auer in the second-fastest classification so will only be tenth for race three.

Dennis van de Laar and Gilbert will share row four for race two with John Bryant-Meisner and Jordan King rounding out the top ten. Auer, who moved into second in the championship with his runner-up spot in race one, will only be 12th on the grid for race two alongside Ed Jones.

Antonio Fuoco‘s tough weekend continues, with the Italian set to start back on the ninth row for both races.

Jensen takes bizarre victory in race one at Zandvoort