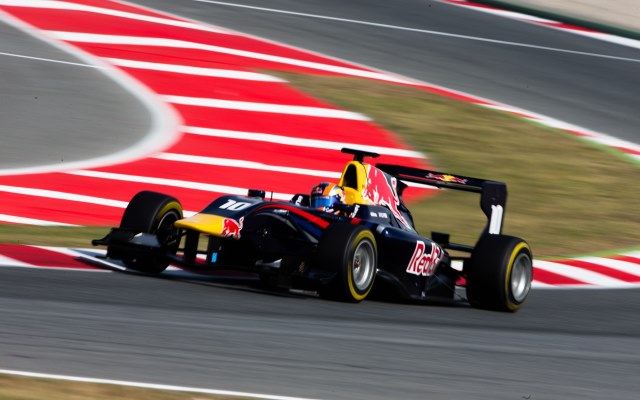 Alex Lynn delivered on his pre-season form to claim victory on his GP3 debut in the first race of the season in Barcelona.

The new Red Bull Junior Team recruit saw off an attack into turn one from Marvin Kirchhofer to pull away at the front and take a 2.4 second win.

Kirchhofer recovered from stalling at an aborted start, retaking his place on the front row of the grid and then attempting to pass Lynn into the first corner. The German F3 champion moved to the Briton’s outside but ran too deep.

Kirchhofer rejoined alongside Richie Stanaway and Jimmy Eriksson, with the Swede taking two positions to move up into second. Although Lynn pulled an early gap, Eriksson did manage to keep pace with him at first before dropping back. The result gave Eriksson his first points in GP3 after a nightmare rookie season with Status in 2013.

Status showed their improvement over the winter though, with Stanaway completing the podium in his first single-seater race for 23 months, finishing a lonely third some eight seconds behind Eriksson.

Patrick Kujala claimed his best GP3 result in fourth for Marussia Manor ahead of Kirchhofer, while Dino Zamparelli held off a fast-starting Dean Stoneman for seventh. Stoneman had started the race back in 13th but made up all his places in one lap in a race that was otherwise void of much overtaking.

The best chance of some action in the leading positions was in the battle for eighth and reverse grid pole for race two, but former F2 runner-up Matheo Tuscher was able to hold off a gaggle of cars led by Nick Yelloly and Patric Niederhauser.

There were a number of incidents on the opening lap, including Lynn’s Carlin team-mate Emil Bernstorff running into the gravel at turn five and Roman de Beer hitting the wall on the exit of turn eight after contact.