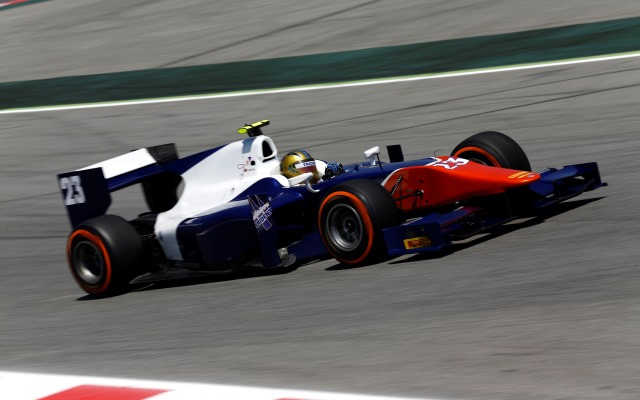 Johnny Cecotto returned to the top step of the podium with victory from 16th on the grid in a strategic GP2 feature race in Barcelona.

The Trident driver survived a chaotic start to the race to move up to fifth in the opening laps and then stayed out in the lead on his harder tyres as those ahead pitted to remove their softs.

Cecotto’s pace was strong enough to increase the gap between himself and the cars that had stopped, led by Jolyon Palmer. When Cecotto pitted he rejoined Palmer and just ahead of Felipe Nasr. Nasr tried to get past over the next lap but Cecotto defended well, and once his tyres were up to temperature he quickly reeled in Palmer and passed him into the final chicane.

Cecotto pulled away to take a 3.4 second win – his first victory since Hockenheim in July 2012.

Palmer came under intense pressure from Nasr on the final lap, but the Briton held onto claim second place and extend his championship lead.

Palmer inherited the race lead after an eventual start. The original start was aborted for a waved yellow towards the back of the grid, but this caught out several other cars who then failed to get away for the additional formation lap. This included pole-sitter Stephane Richelmi as well as?Stoffel Vandoorne, Facu Regalia and Takuya Izawa.

When the race did get underway, Mitch Evans moved down the inside of front row starter Palmer. Third-place starter Stefano Coletti had also made a good getaway and attempted to swoop around the outside of the pair on his right. However, contact was made with Evans that sent Coletti gave both damage that required visits to the pits.

Palmer was fortunate to escape into the lead and largely unscathed, ahead of Nasr,?Julian Leal, the Caterham pairing of Rio Haryanto and Alexander Rossi and then Cecotto.

The safety car came out at the end of lap one due to contact between Raffaele Marciello and Daniel Abt at turn ten. Marciello had started fourth on the grid but suffered a slow getaway.

Rossi was passed by Cecotto at the restart, but he had closed on Haryanto once they had made their pitstops. However, the American’s race came to an end when he pulled off with an engine problem.

Haryanto would finish fifth, nine seconds behind Leal, who continued his strong start start to the season after two podiums in Bahrain. On Haryanto’s tail at the end were Arthur Pic, the late-stopping Rene Binder (under investigation for not respecting yellow flags) and debutant Tio Ellinas, who claimed reverse grid pole for Sunday’s sprint race.

Tom Dillmann finished ninth despite a black-and-orange flag and subsequent slow stop to repair an insecure engine cover, with Adrian Quaife-Hobbs just holding off the recovering Richelmi for the final point.