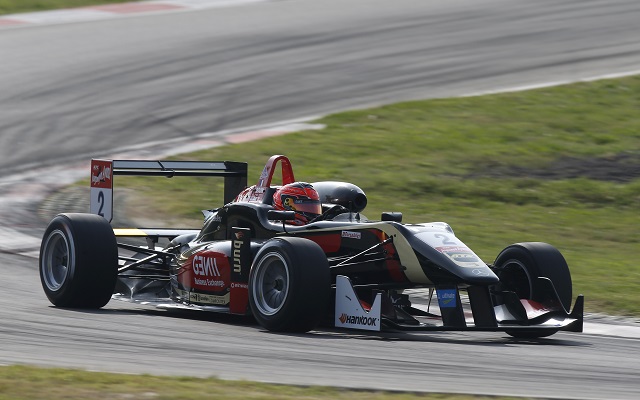 FIA F3 European Championship leader Esteban Ocon took his ninth victory of the season in race one of the penultimate round at Imola.

Ocon’s triumph – his first since his hat-trick at Moscow Raceway two rounds ago – came after a controlled drive in which the Frenchman managed the gap to his rivals throughout the race distance.

After an early safety car for an incident involving Fortec teammates Santino Ferrucci and Hong Wei Cao, and a subsequent restart, Ocon pulled out a 1.5s gap to second-placed Jordan King, which he’d maintain for most of the race.

The Briton, who started on the front row and held on to second off the line, managed to keep up with Ocon and even closed the gap down to just one second in the final laps, but ultimately backed down to take a well-deserved P2.

His Carlin squadmate Tom Blomqvist held on to third, which elevates him to second in the standings, with rival Max Verstappen having a race to forget.

The Dutchman, who started P15 on the grid, was up to ninth after the opening lap and then moved into seventh over the opening stint of the race.

However, an audacious attempt on sixth against Jake Dennis saw Verstappen bounce over the kerbs and slide into the gravel.

As he rejoined in ninth, he was then bumped off-track by Antonio Fuoco before ending his race after a collision with Roy Nissany.

Up ahead, it was Mucke’s Felix Rosenqvist who took fourth, with Antonio Giovinazzi ending up in fifth.

Lucas Auer found a way past Dennis to claim sixth, whilst Felix Serralles, Tatiana Calderon and Sean Gelael rounded out the top ten as Fuoco picked up a drive-through penalty.

Another Prema driver – Nicholas Latifi – was set to start ninth but saw his car expire on the warmup lap.

In the standings, Ocon now leads Blomqvist by 97 points with 125 available. Verstappen is now the only other driver in mathematical contention for the title a further five points adrift.

Sutton claims double pole for finale, Scott ahead of Kruger