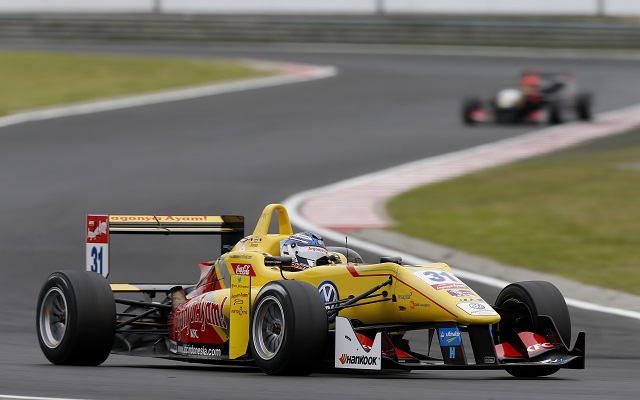 Championship leader Esteban Ocon and challenger Tom Blomqvist led the two respective Friday practice sessions ahead of the seventh FIA F3 round of 2014 at Moscow Raceway.

Ocon, Max Verstappen and Jordan King were the pacesetters throughout most of the opening session, frequently one-upping each other at the top of the leaderboards and generally locking out the top three.

The Frenchman took over at the top for good coming into the final ten minutes of the session, while Blomqvist beat both to second Verstappen and King with five minutes to go. The session was then red-flagged at the penultimate minute due to a stop for Jo Zeller Racing’s Tatiana Calderon.

As such, Verstappen, who is coming into the weekend with an ongoing streak of six consecutive wins in the series, settled for third, while King and Dennis van de Laar rounded out the top five.

The second session, delayed somewhat due to the late red flag, was also led by Ocon during the first half, before a red flag brought a brief halt to the proceedings, caused by Hector Hurst stopping in the gravel.

When the green flag was back out with 15 minutes to go, Fuoco and Blomqvist managed to clear Ocon and battled it out for the session’s benchmark, with the Brit eventually prevailing over the Ferrari junior.

Ocon took third, with King posting another fourth and Auer in P5. Dennis was sixth ahead of Felix Rosenqvist, while VAR duo of Verstappen and Szymkowiak and van de Laar made up the rest of the top ten.

Qualifying for race one will take place later today.