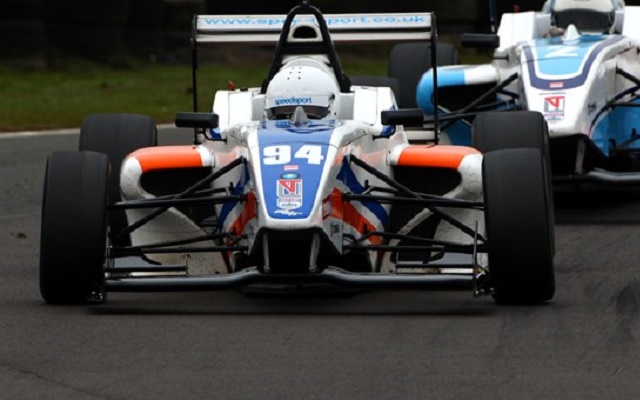 O’Brien, whose best finish from the four preceding races was a tenth place, lined up on reverse-grid pole and stayed well out of trouble to hold on to a win.

His triumph means MGR have become the third team to win in all three seasons of BRDC F4, joining top squads Lanan and HHC.

After starting from pole, O’Brien built up a 2.4s advantage over one lap, leading Jordan Albert and Ciaran Haggerty, the latter storming from 14th on the grid.

Haggerty then fell behind Chris Mealin and Tom Jackson, but retook the fourth spot just as the safety car came out for Jack Lang.

But the field was back to green shortly thereafter and it was a superb restart for O’Brien, who made the most of the battling behind him to restore his lead.

Haggerty moved up to second after the restart, only to go off and pick up a race-ending puncture.

As such, Jackson inherited runner-up and began to reel in the race leader.

He slashed the gap from 3.5s to 0.6s in the remaining laps but came up short, settling for a second place behind O’Brien.

Albert took third, while Harri Newey, who lined up last after his car failed before the start of race one, made it up to fourth place.

Will Palmer recovered from an early spin to claim fifth ahead of Mealin and Akhil Rabindra.

Beckmann sweeps to maiden victory in race two at Vallelunga