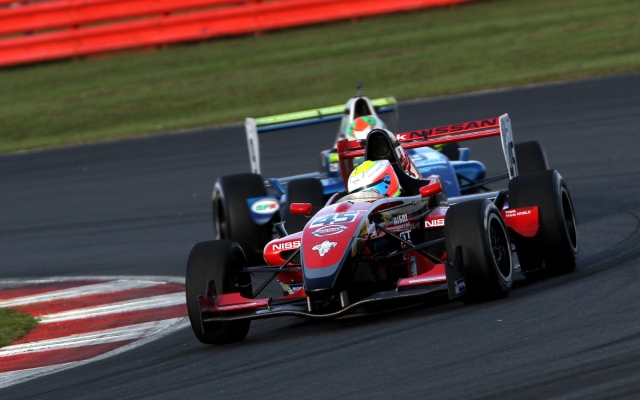 Colin Noble claimed his maiden single-seater victory by just 0.06 seconds as he pipped Piers Hickin to the win in race one of the final Protyre Formula Renault round at Silverstone.

Noble retained the lead from pole position ahead of Hickin, but was unable to ever put more than nine tenths of a second between himself and his chaser.

Hickin would half the gap between from 0.8 to 0.4 seconds between laps seven and 11 and stayed close until the 18th and final tour of the national circuit, when he pulled alongside Noble on the run to the finish line. However, it was MGR Motorsport driver Noble who got to the finish line first by just six hundredths of a second.

Matteo Ferrer held third off the start but spent much of the race having to defend that position from MGR team-mate Pietro Fittipaldi. On lap 14 there was contact between the two at Becketts, causing Ferrer to spin. Fittipaldi finished three seconds behind the winner in third place, but lost his podium position due to a post-race penalty.

Ferrer rejoined behind TJ Fischer, but only took a lap to reclaim the place and put himself in position to inherit third once Fittipaldi was relegated to fourth.

Fischer finished fifth ahead of Alex Gill, who had to fight back to his grid position of sixth after a slow getaway dropped him to ninth and last, passing Patrick Dussault, Michael Epps and Jack Butel.