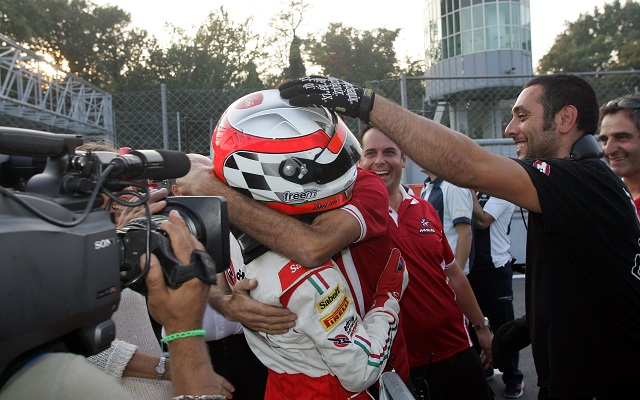 F & M driver Mattia Drudi took his second win of the season in an incident-packed first race in round six of the 2014 Italian F4 season at Monza.

The 16-year-old Italian lined up on pole, but lost the lead to Prema driver Brandon Maisano at the start. He lost further ground thereafter, and was passed by recently-crowned champion Lance Stroll, series newcomer Sennan Fielding, and Andrea Russo to be shuffled down to fifth on lap two.

At the start of the second lap, there was contact between Robert Shwartzman and Takashi Kasai on the run down to turn one, despite yellow flags being waved there. Shwartzman careered into the back of Leonardo Pulcini, who went off and hit a recovery truck. The carnage brought out the safety car.

The safety car stayed out for several laps, but when it finally came in, the race burst into life. Maisano reacted slowly on the restart, and Stroll swiftly pounced on his teammate, demoting the Frenchman to second. Russo passed Fielding for third and began pressurising the Prema duo in front of him.

Maisano, in a bid to try and get back the lead, ran wide and lost out to Russo. The trio switched positions for the best part of the next three laps. Russo passed Stroll for the lead, straight-lining the second chicane and picking up a warning for his troubles.

It soon turned into a five-way fight for the lead, as Drudi and Fielding caught up with the top three. Both drivers made their way past Maisano, but on the penultimate lap, there was contact between Stroll and Russo at the first chicane, gifting the lead to Drudi. The Italian did not look back, crossing the line 0.57 seconds ahead of Russo.

Stroll meanwhile, came off worst in the melee, dropping down to fifth, while Fielding managed to secure a podium on his maiden outing. Maisano came home fourth, in what was the first time that not a single Prema car had finished on the podium in 2014.

Lucas Mauron charged from 11th to sixth after the restart, with Fielding’s Euronova teammate Andrea Fontana finishing in seventh. Alain Valente and Matteo Desideri came home eighth and ninth, ahead of Ivan Matveev, who will start race 2 on reverse-grid pole.

Update: Russo was given a 1.6 second penalty to drop him from second to fifth, putting him behind Fielding, Maisano and Stroll.

*Russo received a penalty of 1.6 seconds