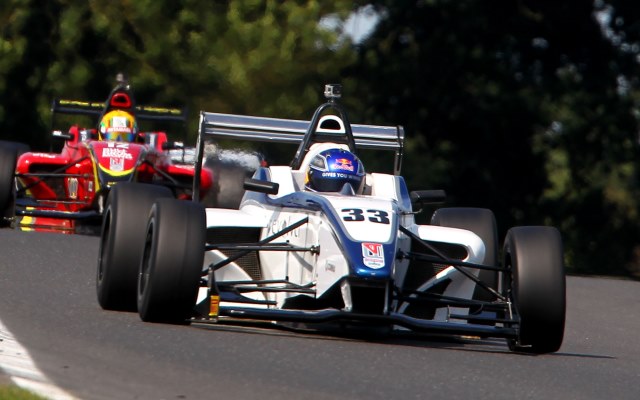 Harrison Newey kept a charging Will Palmer at bay to score his first win in single-seaters in the opening BRDC Formula 4 race of the weekend at Donington Park.

The HHC Motorsport pairing started on the front row, but while polesitter Newey held the lead, champion-elect Palmer made a poor getaway and then ran wide at the first corner to end the opening lap down in sixth.

He made quick work of getting back up into second though, passing Ameya Vaidyanathan on lap two and claiming another two places on lap three past Tom Jackson and Chris Mealin.

By the end of lap five, he’d reclaimed second place by passing Omar Ismail and set off after Newey, who was 3.2 seconds up the road.

That gap remained static initially as the duo traded fastest laps, but Palmer soon started to home in and was just six tenths behind with two laps remaining.

Newey, the son of Formula 1 design legend Adrian, had to defend all the way to the chequered flag but managed to do so, winning by 0.294 seconds.

Vaidyanathan – who had come within three hundredths of Newey’s pole time in qualifying before being relegated to fifth for exceeding track limits – ended up with his second podium finish of the season in third, benefiting from contact between Ismail and Mealin that dropped them down the order on lap 11.

Ciaran Haggerty stayed out of harm to finish fourth from 10th on the grid in front of Ismail, Jack Bartholomew and Mealin.

Jordan Albert finished eighth from P13 on the grid with Akhil Rabindra ninth and Jackson back in 10th after an off-track moment.

Rodrigo Fonseca ended up 12th after contact with Jack Lang on lap one dropped him to last.

Palmer’s standings lead over Jackson is now up to 92 points, putting him on course to secure the title this weekend with 95 points available at the final round.