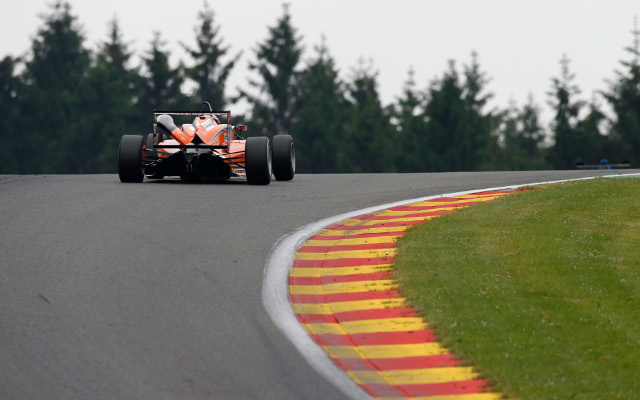 Jake Dennis will start race three from pole position thanks to his second-fastest time, despite his best only being good enough for seventh.

There had been a red flag early in the session (which took place on a drying track and late into the evening after a strike by circuit workers), triggered by Alex Albon in sector two of his first flying lap.

After the restart, race one polesitter Felix Rosenqvist set the pace, with Prema team-mate Lance Stroll just one thousandth of a second slower.

A quick first sector than handed Stroll the lead after the next runs, with Jake Dennis creating a Prema 1-2-3 on both occasions.

The Prema trio then failed to improve on the next time around. Jensen did and climbed to fourth, before being demoted two spots by Santino Ferrucci and Dorian Boccolacci.

The fourth Prema driver Brandon Maisano took top spot away from his colleague Stroll with his next lap, only for Jensen to immediately better than effort by 0.079 seconds.

A second red flag was then triggered by Callum Ilott, denying those who had yet to complete their lap and with not enough time remaining for another restart.

That left Jensen on top ahead of Maisano, with Stroll and Rosenqvist forced to settle for places on row two.

Sam MacLeod and Pietro Fittipaldi got to improve before the stoppage, forcing Jake Dennis – on two personal best sectors before the red flag – down to seventh. Ferrucci, Boccolacci and Sergio Sette Camara completed the top 10.

Although Rosenqvist missed out on a lock-out of qualifying for the fourth time from five rounds this season, his title rivals Antonio Giovinazzi and Charles Leclerc were left down in 12th and 13th, behind?Markus Pommer and just ahead of Ilott.

Leclerc had crossed the line with a time good enough to take third place but it came moments after the red flag, meaning the lap was soon deleted.

Despite Dennis’ failure to improve on his penultimate lap, that time was still 0.012s faster than Jensen had managed that time around, and so tops the second-fastest classification.

Maisano is third, while Pommer leaps up to fourth ahead of MacLeod and Fittipaldi. Rosenqvist heads Stroll on row four, with Camara and Ilott completing the top 10.

Leclerc was again 13th, and points leader Giovinazzi only 18th.