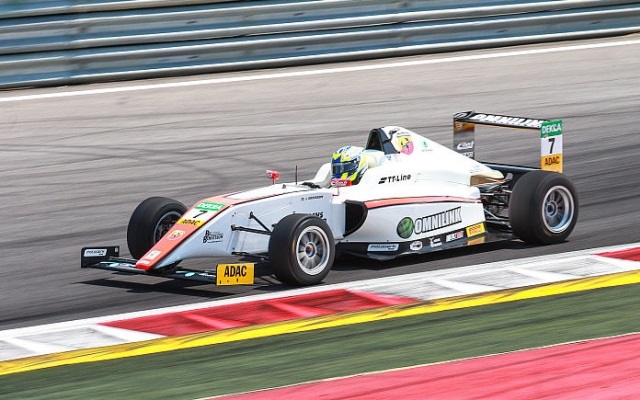 Joel?Eriksson topped the ADAC F4 qualifying session at Spa-Francorchamps to pick up his second and third pole position of the season.

Running within the first group, Eriksson established his lead in the early stages as the field only had time to run two flying laps before rain hit the track.

Recording the benchmark with both of those laps, Eriksson ended up first, leading by eight tenths.

His closest challenger Guan Yu Zhou, who returns to racing after a horror crash at Spielberg two weeks ago, will start race one right behind the Swede.

HTP duo Marvin Dienst and Janneau Esmeijer grabbed third and fourth respectively, while the top five of the group was rounded out by David Beckmann, who was already 1.8s off Eriksson’s pace.

The group B drivers kicked off their respective session knowing they couldn’t fight for pole as the track remained considerably wet.

Marek Bockmann was leading halfway through when red flag neutralized the running.

Mauro Auricchio and Tim Zimmermann didn’t make it to the pits during the pause and were not able to continue when the session resumed.?As such, both of them were relegated to the lower positions as improving track conditions allowed for better times.

Although Prema’s Ralf Aron was the initial leader after the green flag, Robert Shwartzman stole first from the Estonian in the dying seconds?to claim a front row start in race one.

Aron had to do with second, one tenth off the pace, closely followed by series debutant Lando Norris, while Van Amersfoort driver Joseph Mawson and Jenzer’s Bockmann secured fourth and fifth to secure grid spots within the top ten.

Race two’s starting order, which is determined by the second-best times of the qualifying, sees Eriksson take the top spot once again but it is Aron who will join him at the front this time around.

First pole-sitter of the series Esmeijer will kick off in third followed by Shwartzman and Zhou. Norris will again start from sixth as the top ten of the grid will be completed by Dienst, Harrison Newey, Giorgio Maggi and Mawson.