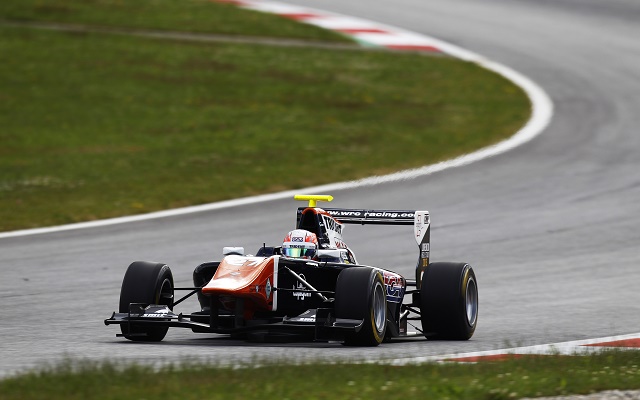 Trident’s Luca Ghiotto confirmed his mastery over GP3 qualifying, taking his second pole of 2015 and his third in the series overall.

Ghiotto was fourth in practice yesterday, but looked unbeatable around Spielberg early on Saturday morning.

Kirchhofer responded on a new set with ten minutes to go, becoming the first driver to go beyond 1:20s this weekend.

He was soon narrowly dethroned by teammate and reigning FIA F3 champion Ocon, who then had to retake his spot after Campos Racing’s Alex Palou briefly appeared in first place.

Palou was not done, stringing together two very strong sectors and looking set to take provisional pole, only to run wide on exit of the final corner. He lost control, narrowly avoided the barriers and spun around but managed to rejoin without visible damage.

Just then, however, Ghiotto was ramping up the pace and, despite being stuck behind a Status through the final sector, eased to pole by two tenths.

Points leader Ocon will start second, ahead of Palou and Kirchhofer, with Arden’s Emil Bernstorff moving up to fifth late in the session.

Rookie Matt Parry was the top Koiranen driver in sixth, ahead of Sandy Stuvik and Antonio Fuoco, who led the Carlin charge in eighth after the team locked out practice.

The other Carlin drivers Mitch Gilbert and Jann Mardenborough were tenth and 12th, joined on their rows of the grid by Jimmy Eriksson and Ralph Boschung respectively.