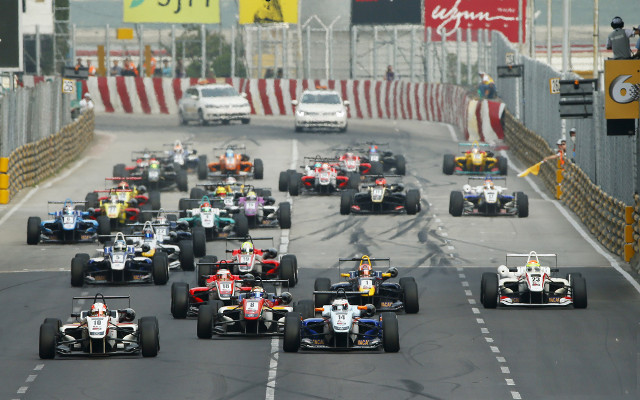 Merhi, who sits second in the FR3.5 standings and has been doing Formula 1 practice sessions with Caterham, will join up with the Double R team – just as he did for the British F3 round at Spa – for his first attempt at Macau since 2011. He will be Double R’s sole entry in the event.

Just as last year, Coletti will drive a solitary EuroInternational car, and will also drive for the team in next weekend’s FIA F3 European Championship finale at Hockenheim in order to become eligible to compete.

Topping the entry list is current European series leader Esteban Ocon at Prema Powerteam, together with Antonio Fuoco and Nicholas Latifi. The team’s entry is again in conjunction with the Theodore Racing project, which carried Alex Lynn to victory last year.

Carlin will field five cars, with the Jogonya Ayam trio of Tom Blomqvist, Antonio Giovinazzi, and Sean Gelael all present together with Jordan King (entered in partnership with Hong Kong-based GR Asia) and Jake Dennis.

Mucke Motorsport will run cars for Lucas Auer, Felix Rosenqvist and Tatiana Calderon, with Rosenqvist making his sixth consecutive Macau appearance and aiming to improve on his previous best finish of second in 2012.

Other European series regulars are West-Tec with Felix Serralles and Macau local Andy Chang and ThreeBond with T-Sport, who will have their regular driver Spike Goddard and recent recruit Nick Cassidy.

Signature and Motopark are due to make their European F3 returns this weekend at Imola and next weekend at Hockenheim respectively, and both will continue on to Macau. Will Buller will remain with the French squad for his fifth consecutive Macau F3 appearance, while Motopark will take their German F3 champion Markus Pommer.

Three Japanese teams complete the 28-car entry. Top squad TOM’S will field Kenta Yamashita and Sam MacLeod – a race winner in the British and German series and a one-off entrant in Japan with Toda Racing, who will instead take fellow Briton Dan Wells to Macau. Wells made his F3 debut with Double R at Brands Hatch at the end of August and is aiming to do Japanese F3 full-time. Nissan-backed Mitsunori Takaboshi will race for B-Max Racing.