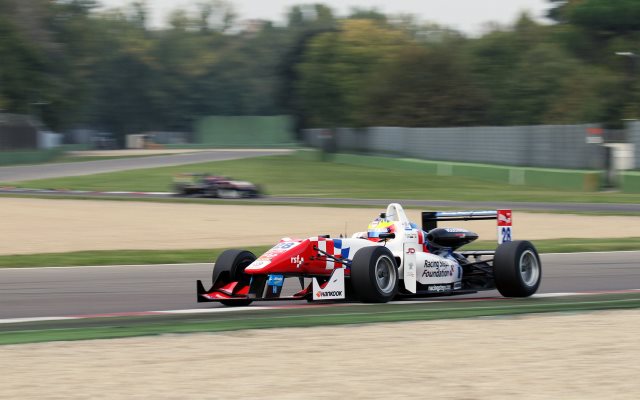 Jake Dennis set the quickest time on the first of two days of FIA F3 European Championship in-season testing at Imola, ahead of Lucas Auer and Max Verstappen.

Verstappen – who has been announced as a Toro Rosso Formula 1 driver, turned 17 and made his free practice debut since the last F3 event at the Nurburgring in August – topped the times in the morning session.

Auer was fourth ahead of Carlin duo Antonio Giovinazzi and Dennis. Championship leader Esteban Ocon – who celebrated his 18th birthday last month – was seventh as the fastest driver from Italian squad Prema, with Felix Rosenqvist eighth.

Completing the top ten in the morning session were two of six new drivers joining the series for the test – double Toyota Racing Series champion Nick Cassidy in a third T-Sport car, and Marvin Kirchhofer together with Motopark, returning to European-level F3 for the first time after nearly three years away.

With Kirchhofer competing in GP3 in Sochi this weekend, Motopark will not make their race return until Hockenheim the following week.

In the afternoon, Verstappen was able to improve his time by half a tenth of a second, but he was 0.066s slower than Dennis. In between them was Auer, 27 thousandths behind the Racing Steps Foundation protege.

Tom Blomqvist was forced to miss the day’s running after suffering minor concussion in a fall. He will return to action for Wednesday.