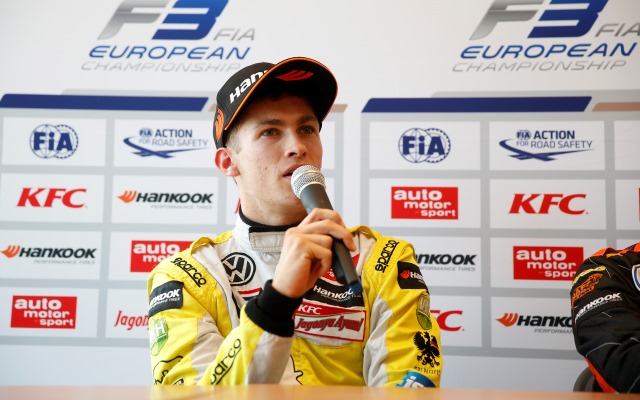 Gustavo Menezes will move to Carlin for his second season in the FIA F3 European Championship in 2015.

The American driver has spent the past two years with the Van Amersfoort Racing squad, finishing fourth in German F3 in 2013 and then 11th in the European series in 2014.

He scored a pole position at Spa-Francorchamps, where he also scored his best race results of the campaign with two third-places.

“Carlin is a fantastic team who excel in every series they compete in,” said the 20-year-old.

“The list of drivers they have run reads like the who?s who of motor racing and I look forward to working with the guys and doing everything I can to get some good results next season.

?Like all young American drivers I would love to be involved in F1, DTM, IndyCar or Sports cars ? any of them would be a dream come true. That said, the only way I am going to get there is to win races. I have a great team in Carlin and I will be pushing as hard as I can to do that.”

Trevor Carlin added: ?Gustavo is an extremely welcome addition to our team.? We watched him with interest this year and he clearly has a lot of potential.

“As well as showing good pace, it?s important to have the right relationship between team and driver and Gustavo has settled in very quickly at Carlin.? He did a great job testing with our GP3 team last week and has already impressed in his first F3 test with us this week at Silverstone.? He will be a great asset to the F3 team next year and we look forward to many strong results together.?

Menezes is the first driver confirmed for 2015 by Carlin, who took Tom Blomqvist to P2 in this year’s standings. Jake Dennis has already announced a switch to rival squad Prema.

Monza and Zandvoort back on Euro F3 schedule for 2015