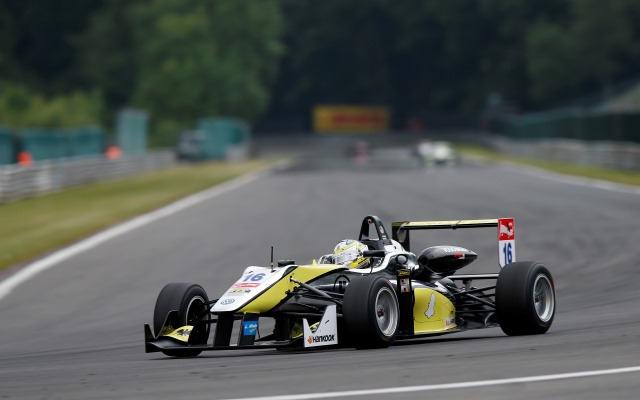 Gustavo Menezes and Esteban Ocon will start from pole position in the second and third races respectively at the FIA F3 European Championship weekend at Spa-Francorchamps.

The qualifying?was immediately interrupted by a red flag, caused by a crash for Mitch Gilbert. By the time the qualifying resumed, the track was completely wet, forcing the drivers to use wet tyres.

The fastest lap was recorded in the last second by Gustavo Menezes to complete a one-two for Van Amersfoort Racing with Max Verstappen, who ended up in second.

Lotus junior Ocon will start third and will share the second row with Swede John Bryant-Meisner, one of the benefactors of the chaotic session.

Felix Serralles secured fifth, followed by Alex Toril and Felipe Guimaraes, who both took their best qualifying positions of the season.

Mucke Motorsport duo Lucas Auer and Felix Rosenqvist had to settle with eighth and ninth and the top ten was completed by Michele Beretta.

The pole for race three returns to?Ocon with Bryant-Meisner joining him on the front row. Serralles and Guimaraes took third and fourth respectively, followed by Verstappen and Menezes.