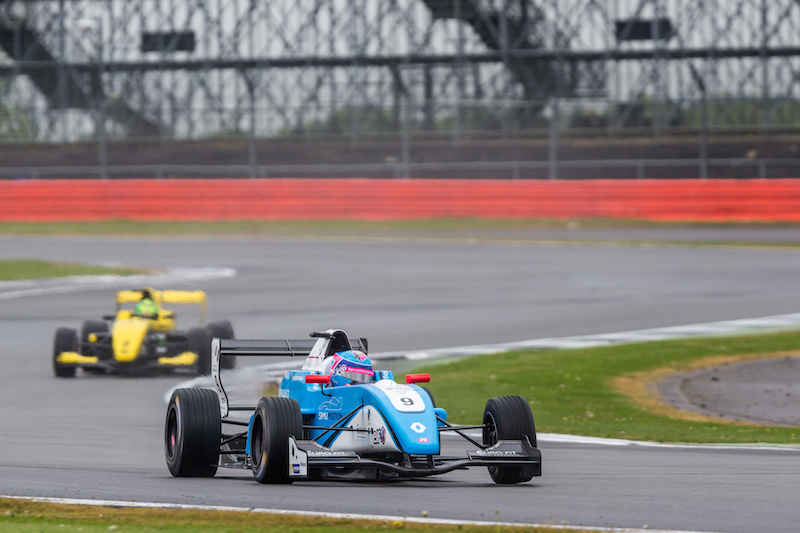 Max Defourny overcame a rain shower in his qualifying group to grab pole position for the first Formula Renault Eurocup race of the weekend at Silverstone.

Defourny’s R-ace GP team-mate at points leader Will Palmer had topped the times in the opening group after a battle with another of the French squad’s drivers Robert Shwartzman, and it looked like the Briton’s time would remain good enough for pole when rain fell with six minutes left in the second group.

At this point, Sacha Fenestraz was quickest in the second group but slower than Palmer’s time, and when Luis Leeds grabbed second as the rain came down he immediately skated off into the Copse gravel trap.

This caused a full-course yellow while his car was removed, and when that was lifted with just under three minutes left, the rain had already stopped.

Henrique Chaves went quickest inside the final minute and underneath Palmer’s benchmark, but Defourny was able to go even quicker on his last lap by 0.143 seconds.

Chaves went top again with his final effort, but the time was immediately deleted after was found to have?exceeded track limits at Stowe.

Defourny and Palmer will therefore share the front row of the grid, with Chaves joined on row two by Shwartzman, who threatened to deny Palmer the best time in group one before being bettered by just 0.014s at the chequered flag.

Mexican champion Axel Matus will line up an impressive seventh ahead of Richard Verschoor, with Fenestraz back on row five alongside Gabriel Aubry.

Dan Ticktum’s qualifying struggles from Monza continued with only the seventh-best time in the first group, but fellow Red Bull Junior Neil Verhagen suffered much worse and was 14th in row two, ahead only of Leeds who had his best effort deleted for causing the interruption.