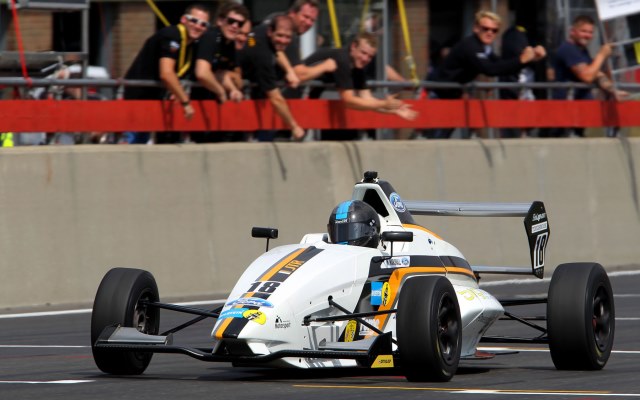 Max Marshall scored his first Formula Ford GB win in the opening race at Snetterton which saw title contender Jayde Kruger fall back to sixth after starting on pole position.

A clash between front row starters Kruger and Ashley Sutton on the opening lap allowed Marshall to get up into the lead after starting fourth.

Kruger held second and kept up with JTR team-mate Marshall in the opening laps but lost pace in the second half of the race due to gearbox issues and misfire, which caused him to lose four places in quick succession and enabled Marshall to win by 4.3 seconds.

Kruger’s title rival Harrison Scott was the first benefactor, moving up to second place to extend his championship lead. Completing the podium was Ashley Sutton after an adventurous race.

Driving for the new MBM Motorsport entry (formerly Jamun Racing), he fell from second to fourth at the start but continued his strong recent pace as he attacked Scott for third. He went side-by-side with Scott at the end of lap two, but Scott retained the place and Sutton fell back into the clutches of Ricky Collard. Collard nosed ahead crossing the line one lap later, but Sutton was able to turn in ahead.

He was able to get back on the case of Scott, who was given a warning for exceeding track limits. They were side-by-side again at the start of lap six and Sutton boldly attempted to take the place around the outside of the first corner, Riches, only to lose out and fall back to sixth.

He quickly re-passed James Abbott, and took fourth from Collard when the Falcon driver had an off track moment at Brundle. Sutton would have a wide moment of his own on the last lap that put him back under pressure from Collard, but he was able to hold on. Sutton will start both of Sunday’s races from pole.

Abbott was fifth ahead of Kruger, with a muted Juan Rosso seventh. Michael O’Brien, a successful racer of historic Formula Fords making his contemporary debut alongside Sutton at MBM, was eighth with the top ten completed by?Chris Mealin and Louise Richardson.