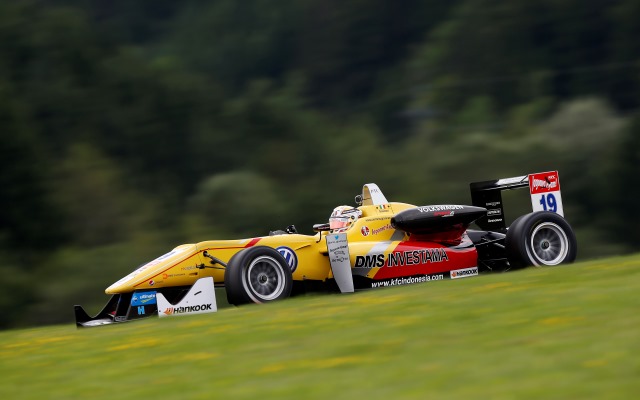 Antonio Giovinazzi will start both Sunday races in the FIA F3 European Championship at Spielberg from pole position after dominating the second qualifying session.

Giovinazzi, who finished second in race one earlier on Saturday, moved to the front around halfway through the 20-minute session, when a red flag was triggered by Hector Hurst coming to a halt on the pit straight.

Although he was shuffled down the order by a flurry of quick laps after the restart, Giovinazzi then went three tenths of a second clear at the top, and would set three lap times underneath the 1m25s mark to clinch both available poles.

Giovinazzi’s best time – a 1m24.748s – was 0.288s clear of the field. Nobody else could break into the 1m24s, although three drivers did come within a tenth of doing so. The first of those was race one winner and Giovinazzi’s?Jagonya Ayam with Carlin team-mate?Tom Blomqvist, who will line up second for both races.

Lucas Auer and Antonio Fuoco will share row two for race two. Felix Rosenqvist was fifth, while Esteban Ocon and Max Verstappen had subdued sessions following their race one coming together, and could only manage sixth and seventh respectively – the Frenchman edging his Dutch rival by 0.013s.

Carlin got five of its six drivers into the top ten, with Jordan King eighth, Jake Dennis ninth and Ed Jones tenth.