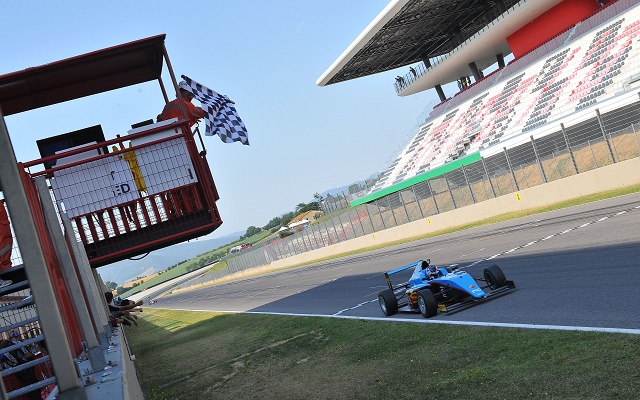 Argentine driver Marcos Siebert took his maiden? series victory for Jenzer in the race two at Mugello, in the fourth round of the Italian F4 season.

Raul Guzman started on pole after finishing tenth in race one yesterday, but was swamped off the grid and fell to fourth. This handed the lead to RB Racing’s Diego Bertonelli, while Siebert and Bar Baruch slotted in behind him.

Siebert began pressurising Bertonelli straight away, soon managed to make a move stick around the outside at the San Donato corner on his second attempt, and began pulling away from the field.

Guzman made amends for his slow start by making identical moves at San Donato on Baruch and Bertonelli to move into second. The Israeli almost got past the Italian, but was baulked and lost fourth to Ferrari junior Guan Yu Zhou.

The three-way battle for third raged on however, and Baruch would have the last laugh when Bertonelli repeated his defensive move at turn one on the last lap, forcing Zhou to brake early and letting the Israeli through.

Mauricio Baiz had a relatively uneventful run to sixth ahead of MSA Formula frontrunner Lando Norris. Joao Vieira held off the fast-charging Lucas Mauron for eighth, who had passed Giuliano Raucci and race one winner Ralf Aron on successive laps.

Raucci rounded out the top ten, with usual frontrunners Aron, Robert Shwartzman and David Beckmann failing to finish in the points.