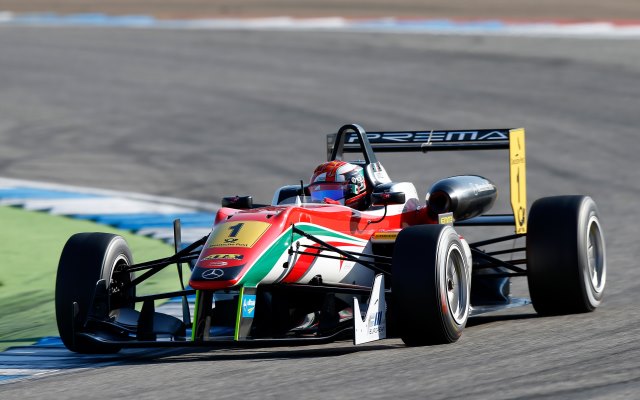 Felix Rosenqvist won again in the second FIA F3 European Championship race at Hockenheim but couldn’t prevent Raffaele Marciello putting the title beyond his reach as he cruised to a fourth place.

Rosenqvist led away from pole position as Marciello slipped from the front row to third behind fast-starting team-mate Alex Lynn. The British driver kept Rosenqvist in sight during the early stages but was forced to settle for second, finishing 3.5 seconds behind the Swede.

Marciello appeared to ease off as the race went on and slipped behind Lucas Auer to fourth. That was the minimum result that the Ferrari protege needed to wrap up the title and he was able to cruise to the chequered flag with no pressure from behind.

Harry Tincknell was unable to keep up with the leading four and found himself with a queue behind him early on but was able to remain in fifth. Sven Muller was sixth with Antonio Giovinazzi matching his best result of the year in seventh.

There was a peculiar incident further down the order as Kevin Korjus and Felix Serralles tangled on the run to the hairpin after both had served drive-through penalties for “leaving the track”. As Korjus drove straight onto the tarmac run-off with damage to his car, Serralles drove close to him and then appeared to deliberately move towards the Estonian, causing further contact between them.

UPDATE: Felix Serralles has been excluded from race two and moved to the back of the grid for race three following deliberate contact with the car of Kevin Korjus.