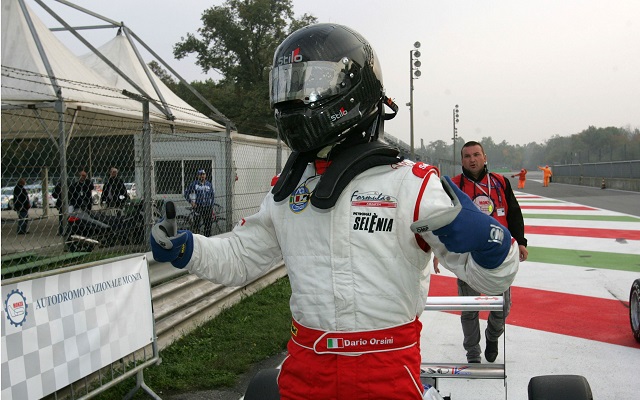 Front row men Michele Beretta and Simone Iaquinta were a major source of entertainment in the first half of the event, as they took turns overtaking each other on the slipstream-heavy Italian track. However, as Beretta returned to the lead, he was given a drive through for jumping the start earlier, which dropped him to the back of the field.

As such, Iaquinta looked like he had the race wrapped up, but, with mere minutes to go, he pulled into the pitlane with a mechanical problem, surrendering the win to Orsini.

Series champion Alessio Rovera had a challenging race from the back of the grid, with a strong drive that was eventually rewarded with a podium. He managed to overtake most in the lower half of the field, but then found himself stuck behind a feisty Vitaly Larionov. Rovera then overtook the Russian, but Larionov was right back in front after a couple of corners.

Amidst the fighting, the duo reeled in Alessandro Perullo, who was running in third prior to Iaquinta’s retirement. Following several laps of close racing, Larionov managed to leave both Rovera and Perullo behind in one turn, with the latter almost immediately spinning out. Rovera then proceeded to attack Larionov yet again and, after two position changes, the Russian lost the car into the Parabolica, forcing Rovera to take to the gravel.

As both rejoined the race with probable damage, Rovera, who settled into second place, started to come under pressure from the recovering Beretta, eventually losing out to the Euronova driver at the flag. Lukas Moraes took fourth, while Sabino de Castro recorded his best finish of the year in fifth.

Perullo recovered to sixth, finishing ahead of Sergey Trofimov, who himself had to make up time after an early spin.

Larionov wound up producing the final clash of the race, as he collided with Denis Nagulin on the penultimate lap. For his role in the incident, the SMP driver will be sent to the back of the grid for tomorrow’s race two.