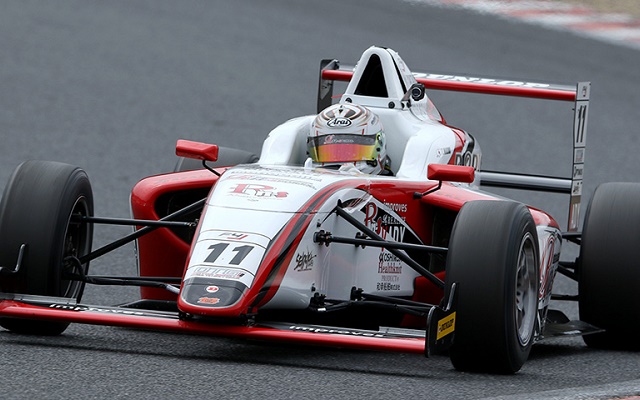 Makino was sixth in the mixed conditions qualifying session, but was up to the front early in the race and eventually beat poleman Shou Tsuboi to victory.

The first period of green flag race running in Japanese F4’s history was over just after a lap when a mid-pack crash took out several drivers, including KCMG’s James Munro, who couldn’t avoid the wreckage.

The clean-up took several laps and Makino, having made it up to second before the safety car, then came close to assuming the lead after the restart, albeit Tsuboi held on.

But, after several laps of fighting, with Shinnosuke Yamada and Shintaro Kawabata also getting involved, Makino finally pulled off the move for good and brought the car home to claim a historic win.

Tsuboi finished as runner-up, two seconds adrift, while Yamada and Kawabata collided, leaving the former out the race. Kawabata crossed the line in third, but was penalized post-race.

As such, Yuya Hiraki inherited the podium spot, right ahead of former Formula Abarth champion Nicolas Costa and Yuichi Mikasa.