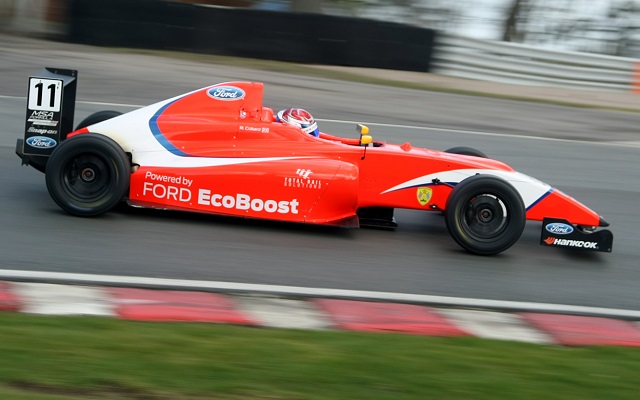 Collard, in his second season of car racing after competing in Formula Ford last year, made a flying start from fourth on the grid and took the lead away from pole-sitter James Pull at Druids.

The first caution period came after Dan Baybutt tagged Sennan Fielding into a spin on lap one, and the second was required when Rafa Martins suddenly slowed to a halt out of P2.

Dan Ticktum was now Collard’s closest pursuer and he pushed Collard hard until the flag, but the Arden driver held on to win by 0.435s.

Fortec racer Ticktum claimed a second P2 finish from as many starts in car racing, repeating his result from race one.

Fellow rookie Pull finished up in third place ahead of American Colton Herta and Racing Steps Foundation-backed Josh Smith, coming through from 12th and 11th on the grid respectively.

Race one podium finisher Matheus Leist had been running fourth under the second safety car but soon lost places to Herta and Smith. He was then under attack from?Enaam Ahmed, but the world junior karting champion retired at Clearways.

Ahmed’s Arden team-mate Sandy Mitchell finished up in sixth ahead of?Jack Barlow, who had began 19th and last after his first-lap retirement in race one.

Leist was eighth, just holding off Lando Norris. The race one winner had a quiet race after falling backwards on the opening lap from eighth on the reverse grid. His Carlin team-mate Petru Florescu completed the top ten.