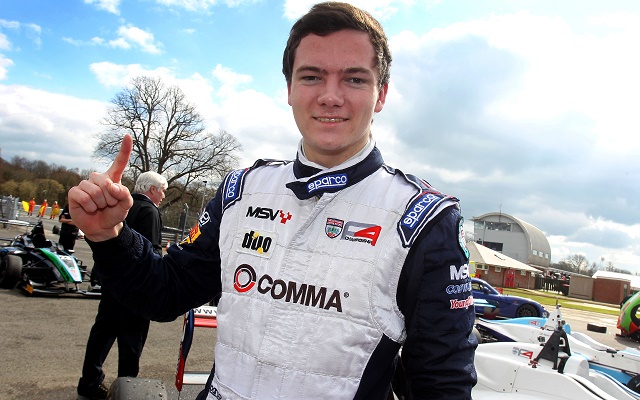 BRDC F4 pre-season favorite Will Palmer was victorious in the opening race of the BRDC F4 season at Oulton Park.

At the start, Palmer managed to comfortably maintain the lead from pole, his HHC teammate Harri Newey losing second to Hillspeed’s Sebastian Lanzetti.

With the South African then doing his best to keep Newey from retaking his spot, Palmer’s advantage grew from two seconds at the end of lap one to four when his teammate finally stormed past Lanzetti.

Over the next few laps, Newey, now in clean air, managed to mostly match Palmer’s pace, but couldn’t seem to make up much ground. Eventually, the rookie started dropping off again, allowing his squadmate to comfortably coast to the checkered flag.

Lanzetti, meanwhile, stayed within two seconds of Newey, but settled for a third-place finish on his BRDC F4 debut.

Behind the leading trio, Tom Jackson led a train of seven cars at halfway point, clutching the fourth spot until the checkered flag.

Jack Bartholomew passed Ciaran Haggerty in the early stages, but couldn’t find a way past Jackson, finishing fifth as the best Lanan driver.

A lap-nine pass on Rodrigo Fonseca allowed Sisa Ngebulana to secure reverse-grid pole for race two, with all three HHC cars placing in the top eight.

Newey picked up the best lap of the race by less than a tenth over Palmer and will start the weekend finale on pole.