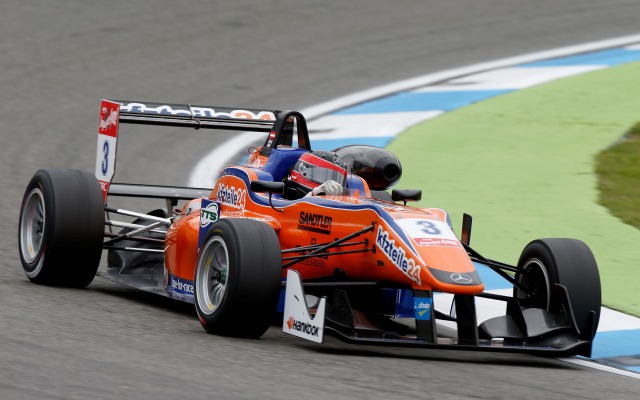 Lucas Auer topped the times in both practice sessions ahead of the 11th and final round of the FIA F3 European Championship at Hockenheim.

The Austrian, who claimed the first of his two victories so far this season at the German venue in May, managed a time of 1m33.206s during the first session and later found an improvement of three and a half tenths to top the second.

His Mucke Motorsport team-mate Felix Rosenqvist bounced back from his heavy accident in the third Imola race last weekend to go second quickest in the first session, albeit 0.488s behind Auer.

Champion Esteban Ocon was third quickest while Jules Szymkowiak had an impressive run to pip his more illustrious team-mate Max Verstappen to P4.

Felix Serralles – contesting his final European race weekend before moving to Indy Lights next year – was sixth for West-Tec ahead of the Jagonya Ayam-backed Carlin duo of Sean Gelael and Antonio Giovinazzi. Jordan King was ninth, and the third Van Amersfoort driver Gustavo Menezes tenth.

The field was closer to Auer in the second session, with Ocon in P2 just 0.177s adrift.

Then came the two drivers fighting for P2 in the standings, Verstappen and Tom Blomqvist, who are separated by three points coming into the final rond.

Antonio Fuoco was fifth fastest ahead of Serralles and King. Nick Cassidy was eighth for T-Sport ahead of Menezes and Dennis van de Laar, who is one of just three drivers with Prema this weekend as Nicholas Latifi has chosen to focus on his FR3.5 programme at Jerez.

For the second year in a row, GP2 veteran Stefano Coletti makes an appearance at the Hockenheim round in order to qualify to participate in the Macau Grand Prix with EuroInternational. The Monegasque driver was 14th in the first session and then 23rd of the 25 runners in the second session.

In a change to the weekend format for the final round, both qualifying sessions will take place on Friday afternoon.