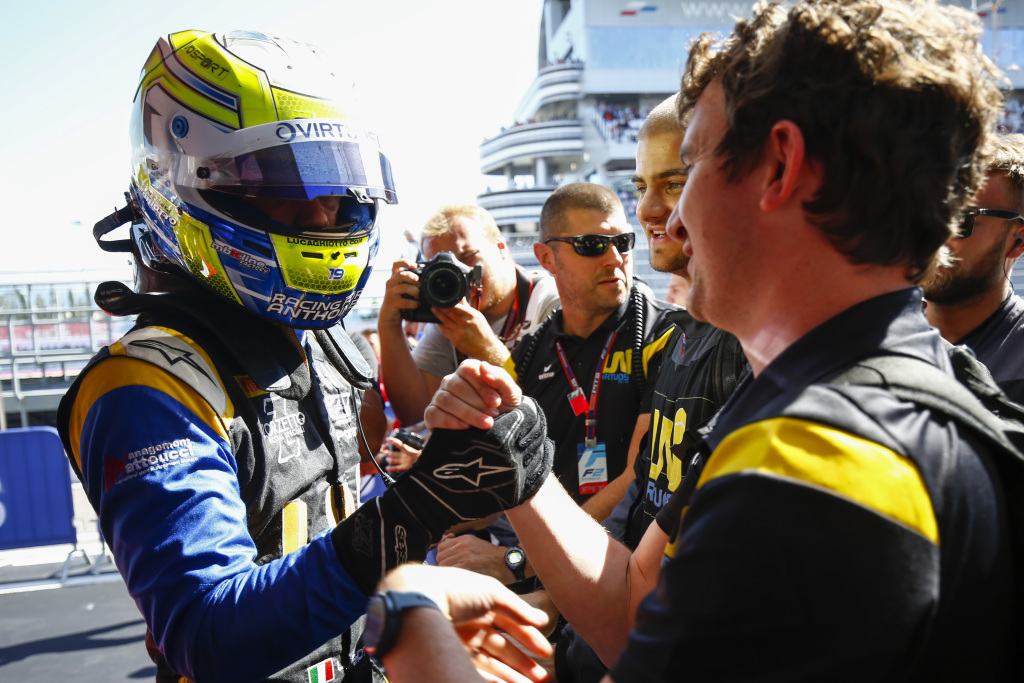 Polesitter Nikita Mazepin battled Jack Aitken on the run to Turn 2 on the first lap of the race, but the two drivers missed their braking points and sailed into the runoff area on the outside of the corner.

Tangling as they attempted to rejoin, Mazepin was pitched across the track and collected Nobuharu Matsushita’s Carlin-prepared car.

Matsushita made heavy contact with the barriers on the outside of the long right-hander Turn 3, along with Mazepin. Both drivers were taken to hospital for precautionary checks, with the incident leading to a 50-minute red-flag delay as the medical team attended to Matsushita and circuit officials completed barrier repairs.

Through the melee, Ghiotto had climbed from fifth on the grid to lead, ahead of Ferrari junior Callum Ilott and Nyck de Vries – who was crowned champion after winning Saturday’s feature race – lining up third at the restart.

With the race shortened to 15 laps, Ghiotto was able to hang onto the lead, absorbing significant pressure from de Vries, who managed to battle passed Ilott immediately at the restart with the two running wheel-to-wheel for several corners.

On the final lap, de Vries threatened Ghiotto into Turn 2, where the Virtuosi driver had regularly occupied a defensive line during the previous laps, but was unable to out-brake the leader.

The top six were covered by less than four seconds at the chequered flag, with de Vries trailing Ghiotto by 0.7s. Ilott clinched third place ahead of DAMS’ Nicholas Latifi.

Latifi inherited fourth from his team-mate Sergio Sette Camara, who was handed a five-second time penalty for failing to rejoin the track by navigating the bollards after running wide at Turn 2 on the opening lap. Sette Camara’s excursion was in avoidance of a spinning Louis Deletraz, after the Carlin driver lost control in the braking zone.

F2 returnee Artem Markelov restarted ninth after starting the race from the back of the grid, and did occupy the final points paying position in eighth at mid-distance. Overtaken by Giuliano Alesi and Jordan King in the closing stages, Markelov ended up 10th.