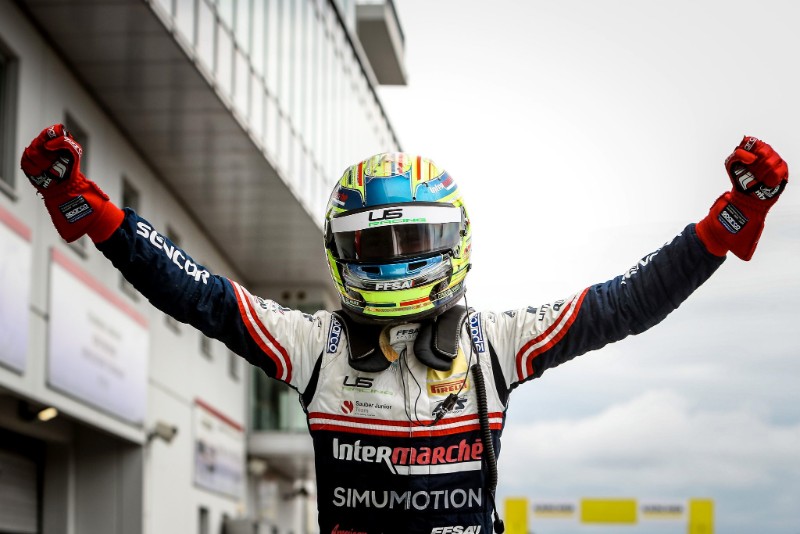 Sauber junior Theo Pourchaire was crowned ADAC Formula 4 champion by a single point at Sachsenring in the final race of 2019, as rival Dennis Hauger was gifted a win.

On the reversed grid, Hauger and Pourchaire started alongside one another on the fourth row, but two slow starts by Sauber juniors ahead meant Hauger ended the first lap in third, while a grassy moment left Pourchaire down in 11th.

As Hauger got himself involved in the battle for victory with Sauber junior Alessandro Ghiretti and Mucke Motorsport’s Joshua Duerksen, Pourchaire toiled at the bottom of the points.

His first piece of luck came when the slow-starting Roman Stanek was handed a drive-through penalty for being outside of his grid box, and a simultaneously timed overtake on Ido Cohen brought Pourchaire into ninth and a one-point lead.

Duerksen passed Ghiretti for the lead at the end of lap seven of 21, as the two R-ace GP cars of Mikhael Belov and Gregoire Saucy dropped down the order and promoted Pourchaire to seventh place.

Ghiretti started to fall away from the lead battle, and came under pressure from Gianluca Petecof. The Prema driver made an unforced error behind though, dropping him to ninth.

Duerksen had built up a 7.4 second lead over Hauger when Oliver Rasmussen (Prema) punted Sebastian Estner (VAR) into the gravel while fighting over fourth, requiring a safety car.

Another two places were gained for Pourchaire, and Red Bull junior Hauger had no response to Duerksen on the restart. It transpired that Duerksen’s restart had been illegal though, and after winning by three seconds he was then docked 30-seconds on the cool-down lap.

Victory was passed on to Hauger, who closed in by another five points on Pourchaire. With fourth place though, Pourchaire was still champion by one point.