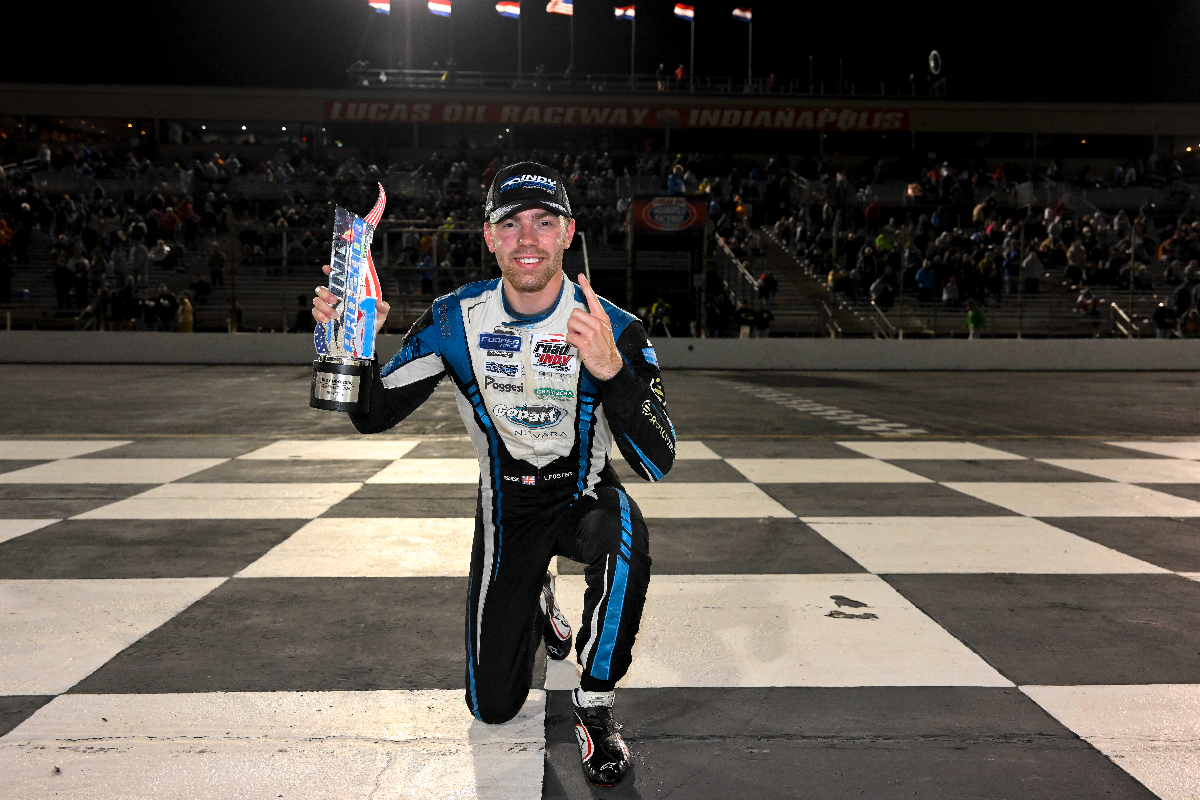 Louis Foster has moved into the Indy Pro 2000 points lead after taking victory in the Freedom 90 night race on the Indianapolis Raceway Park oval.

The Exclusive Autosport driver started third on the grid behind Juncos Hollinger Racing pair Reece Gold and Enaam Ahmed, but was fastest in Friday free practice, his 21.0498s lap beating the benchmark Gold set with his first lap of the session by 0.0361 seconds.

Racing was supposed to take place only a few hours later, but rain induced delays that meant the IP2000 drivers didn’t get back on track until late into the evening and were racing under spotlights.

The top three broke away early on in the 90-lap encounter, with a fairly close battle in the first few laps until Foster started running a slightly lower line to pressure Ahmed.

While Ahmed had the pace to hold his line and his position, it allowed Gold to break away and Foster didn’t actually get his chance to move into second place until the lead trio came to lap drivers inside the top 10.

But with Gold being the first to encounter traffic to lap and therefore usually having the hardest job, it allowed Foster to close in while Ahmed fell back as he had a wobble.

After reaching Gold, Foster got past on the inside but then the former leader was able to stick to the higher line and reclaim first place. Foster then had the advantage on the inside again and got his nose ahead, with this pattern repeating for several laps before Foster finally established himself as being ahead just before yellow flags were waved on lap 54.

Turn 3 Motorsport’s Josh Green had passed Ahmed before the caution period, and on the restart he started hassling Gold which allowed Foster to create a small lead. Soon Ahmed returned to contention to attack Green and that allowed Gold to focus on chasing Foster again.

The leader had it under control though, finishing 1.4089s clear of Gold and a further 1.4088s ahead of Green. Ahmed finished fourth, being chased late on by DEForce Racing’s Nolan Siegel who had escaped the early multi-car battles for fifth place.

Pabst Racing’s Jordan Missig was sixth, involving himself in much of the midfield action before his on-track rivals started to be lapped by the frontrunners and he was able to pull clear to be the last driver on the lead lap.

Siegel’s team-mate Kiko Porto initially didn’t have the pace to fight at the front of the midfield, but he got dragged into the battles ahead of him. He made it to the front of that pack, and once there he found a rhythm that meant he had the pace to stay ahead of the near-constantly fighting Salvador de Alba and Jack William Miller.