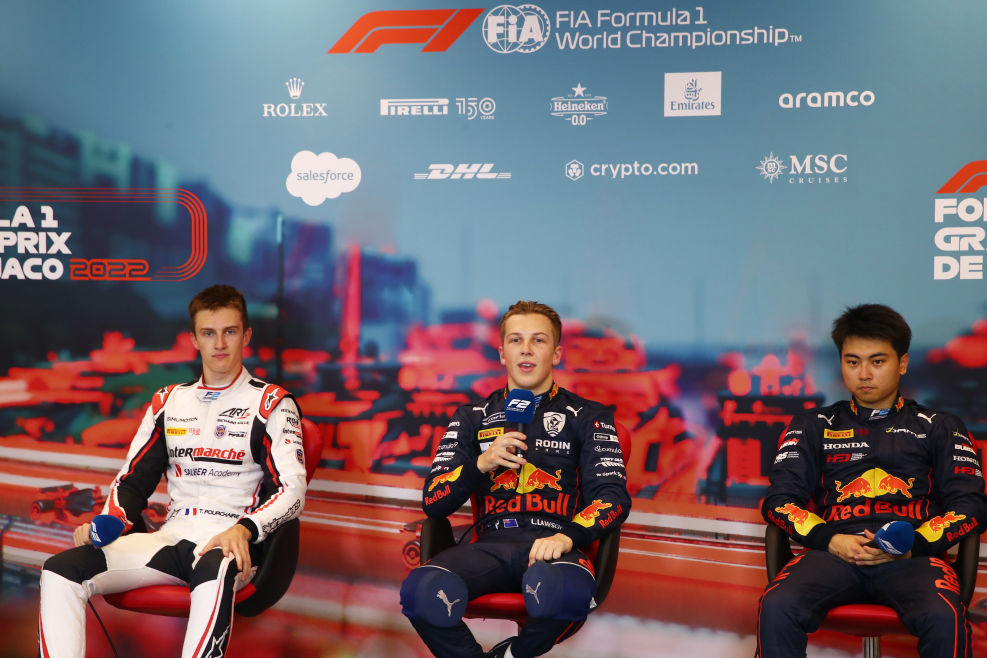 Theo Pourchaire has called on the FIA to look at its rules regarding yellow flags after title rival Felipe Drugovich earned pole position having disrupted Formula 2 qualifying in Monaco.

Drugovich had a crash which left him stuck on track during the closing moments of the first of the two sessions and caused yellow flags. Drivers that improved their laptimes after that point had their laps deleted – and incurred grid penalties for the sprint race – meaning that Drugovich’s earlier top time puts him at the front of the grid for Sunday’s feature race.

Pourchaire was not directly impacted by Drugovich’s crash as he went on to top the slower second qualifying group to guarantee himself second on the grid, but still had strong feelings about the situation in the press conference immediately after the session when the drivers were asked whether those who cause yellow or red flags should have their times deleted.

“The guy that created the yellow flag, if he gets pole, what happened, it’s completely unfair,” Pourchaire said, speaking prior to the stewards’ decisions that promoted Drugovich to pole. “It’s just completely unfair.

“It’s a difficult situation, and that’s why I think the FIA need to reflect a bit on that. We have to check, but in my position I can’t do anything. I just need to wait for the decisions. That’s a tricky decision for the FIA to take. Me, I’m neutral. I’m P2 and I’m happy.”

Liam Lawson and Ayumu Iwasa were both caught out by the incident. Running behind Drugovich on track, they both improved to finish first and second in their group respectively before having their times deleted.

“I think it depends on the situation,” Lawson said before his lap time was removed. “In a situation like today, it would be pretty heart-breaking to lose a laptime, lose a pole over something like this; for someone who’s crashed and then parked it on the straight and then basically ruined it for the guys behind you.

“Every situation is different, but I think it would be pretty frustrating to have someone not do the lap but still get to keep the pole position.”

Pourchaire’s hopes of repeating his Monaco pole from 2021 were thwarted by a red flag late in his session when Jake Hughes crashed heavily in the Swimming Pool section.

“The car is amazing, I would like to thank the team once again because we were very close to that pole,” Pourchaire said.

“Unfortunately, there was a red flag. But the most important thing is that Jake is fine because I think it was a big crash in the fast section. For sure the last lap is always the fastest one, but it’s like that. I’m happy to be P2, P1 of my group, and starting P2 in the feature race is a good place. But we had everything to do the pole today.”