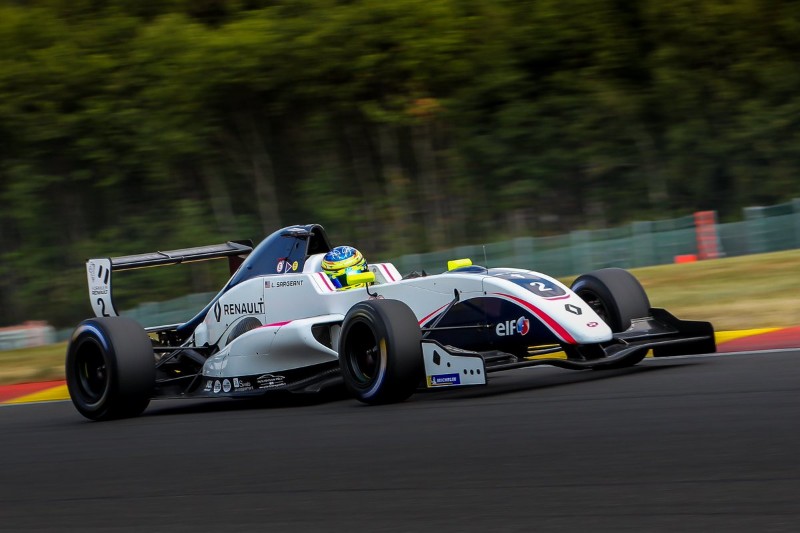 Logan Sargeant claimed his first Formula Renault Eurocup pole at Spa-Francorchamps, topping the times in qualifying for the second race of the weekend.

Sargeant, out in the second of the two qualifying groups, put in a time of 2m19.046s, beating MP Motorsport’s Christian Lundgaard to the top spot by just 0.061 seconds.

Lundgaard and R-ace GP driver Victor Martins spent most of the Group B session swapping places at the top of the order, before Martins’ team-mate Sargeant jumped to the top in the closing stages of the session.

Martins, who was the early pacesetter, had to settle for third fastest in the group and fifth on the grid.

Thomas Maxwell was fourth quickest in Group B, ahead of Arthur Rougier, who just pipped Frank Bird to the final top 10 spot.

Championship leader Yifei Ye was dominant in the first qualifying group, with no other driver able occupy the top spot during the session. But the Josef Kaufmann Racing driver’s 2m19.703s was only good enough for second on the grid.

Lorenzo Colombo was fourth fastest for JD Motorsport, converting into eighth on the grid, ahead of JKR’s Richard Verschoor, who will line up 10th?for the second race of the weekend.

The four drivers entered for Northern Eurocup Cup points sat at the bottom of the timesheets, with R-ace GP’s Gabriel Gandula being the best of those as a result of being in the faster second group.

Doureid Ghattas, Phil Hill and Sharon Scolari, the other NEC entrants, are now the only drivers besides Gandula eligible for the title.