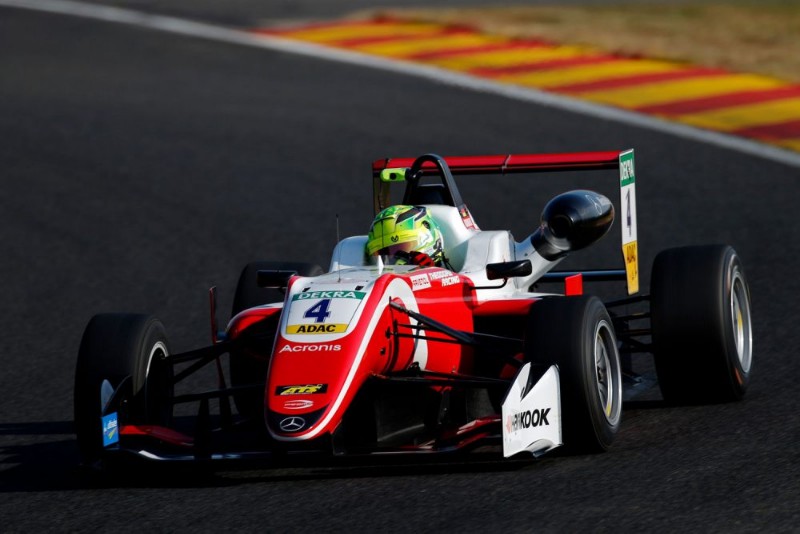 The first qualifying session started late due to repairs that needed to take place on the Belgian track, with Schumacher setting the pace once running began.

With three minutes to go the majority of the grid improved their times, shuffling Schumacher down the order. Prema team-mate Marcus Armstrong looked likely to claim pole until Daruvala snatched first places with seconds to spare. The Indian took pole at Monza in 2017, and made it to the front row at the Norisring this year.

After falling down to 17th in the first qualifying session, Schumacher was able to redeem himself in the wet conditions in the afternoon, putting in a late lap to take his first pole since the Buddh round of the MRF Challenge in January 2017.

Prema dominated the second session, taking up the front two rows of the grid. Zhou sat at the top of the times as the clock stopped, but was bettered by team-mates Ralf Aron and Schumacher, who went nearly three tenths of a second faster than Aron.

Prema’s fifth driver Robert Shwartzman was only able to go eighth fastest, but was sixth in the morning session.

The race three grid, set by the second fastest times in the afternoon session, was dominated once again by Prema.

Zhou took his second pole, with Armstrong and Shwartzman ensuring the team locked out the top three positions. Daruvala was fourth fastest, ahead of Motopark’s Jonathan Aberdein and Juri Vips and race two poleman Schumacher.

Hitech’s Alex Palou claimed third position for race one, but failed to make it into the top 10 for the other two races. Ahmed was seventh fastest in the first session, and ninth on second fastest times in the second session.

Title contender Dan Ticktum started the day 13th fastest in the morning, progressing to 10th in the second session and eighth off second fastest times.