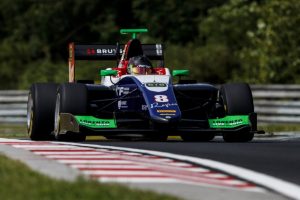 Trident’s David Beckmann topped GP3 practice at the Hungaroring in his first appearance for Trident.

Beckmann, whose best result this year is a sixth place finish in the first race of the season in Barcelona, switched from Jenzer Motorsport to Trident ahead of the Hungaroring round as a result of the driver transfers since Santino Ferrucci was removed from Trident’s Formula 2 line-up.

The German was sitting in ninth place and was nearly one second off ART Grand Prix driver Callum Ilott’s best time before going quickest in the final moments of the session.

Times constantly improved throughout the 45 minute session, with Ilott setting his fastest time with 10 minutes to go after going half a second faster than Janzer’s Tatiana Calderon, who ended up seventh fastest.

Diego Menchaca was eighth for Campos Racing, while MP Motorsport’s Dorian Boccolacci was just 0.001s off his time in ninth place.

Beckmann’s Trident team-mate Giuliano Alesi rounded off the top 10, 0.631s off the fastest lap of the practice session and 0.022s behind Boccolacci.

MP Motorsport’s Devlin DeFrancesco took no part in the practice session due to being ill, but is understood to be expected back for qualifying.