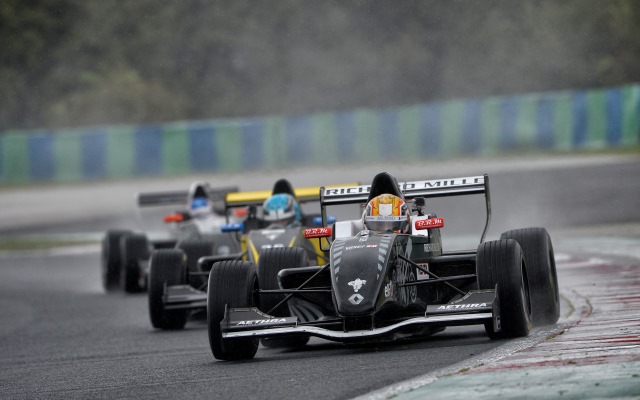 Guest driver Charles Leclerc led the way on a wet practice day as the Eurocup Formula Renault 2.0 category returned to action for the first time since mid July.

The Fortec man, who has competed in two rounds previously this season, topped the times in the faster afternoon session in Hungary.

Leclerc found himself almost a second quicker than the next fastest man on track, Bruno Bonifacio of the Prema team. A further four tenths of a second behind was the British driver Jack Aitken.

Kevin Jorg, who is placed sixth in the drivers? standings, was fourth fastest in the session, followed by Callan O?Keefe and Gustav Malja. It was championship leader and newly-crowned Alps champion Nyck de Vries with the seventh fastest time of the session.

Matt Parry of the Fortec team recorded the eight best time with Steijn Schothorst of Manor MP in ninth. Alexander Albon rounded of the top ten times in the difficult conditions.

The slower morning practice had been dominated by de Vries, who held over a second advantage to the rest of the field. Many of the same names featured in the top ten, with Jorg third, Albon fifth, Parry seventh, Aitken eighth, Bonifacio ninth and Schothrorst tenth.

Andrea Pizzitola, who sits fourth in the championship, was the second quickest man with Ignazio D?Agosto fourth and Nick Cassidy sixth.