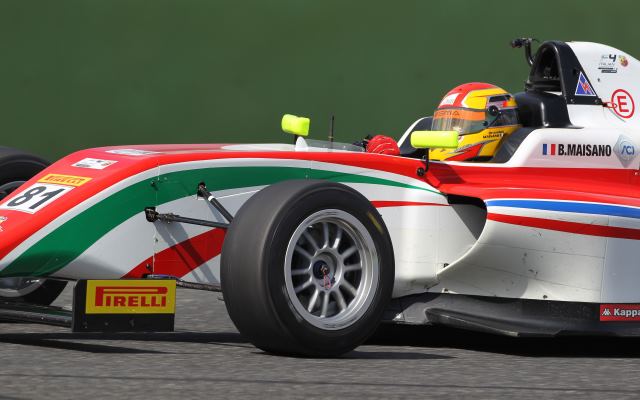 Italian F4 Trophy class championship leader Brandon Maisano continued his strong form to take two pole positions at Vallelunga in the fifth round of the 2014 season.

The 21-year-old Frenchman was unmatched in the first session, taking pole by three-tenths of a second, ahead of Japanese teammate Takashi Kasai, who made it a 1-2 for Prema. Italian driver Mattia Drudi will start third in Race 1 tomorrow, beating Ferrari junior and main series leader Lance Stroll.

Joao Vieira was fifth fastest, and will share the third row of the grid with Euronova’s Leonardo Pulcini. Swiss driver Alain Valente was the best Jenzer driver in seventh, while the rest of the top ten spots on the grid were made up by Ivan Matveev, Andrea Russo and Matteo Desideri. Times were relatively close, with the top thirteen all within a second.

The second session, that decided the grid for race three, was closer at the front, with Maisano edging out teammate Stroll in another front row lockout for Prema. Drudi will start third again, alongside Kasai in fourth.

Pulcini and Vieira locked out the third row once again, swapping places from the first session, with Pulcini’s teammate Andrea Fontana taking seventh on the grid. Valente, Keith Camilleri and Mahaveer Raghunathan rounded out the top ten.

Gustavo Bandeira and Jonathan Giudice, both of whom participated only in the second free practice session, did not set a time in either qualifying session.