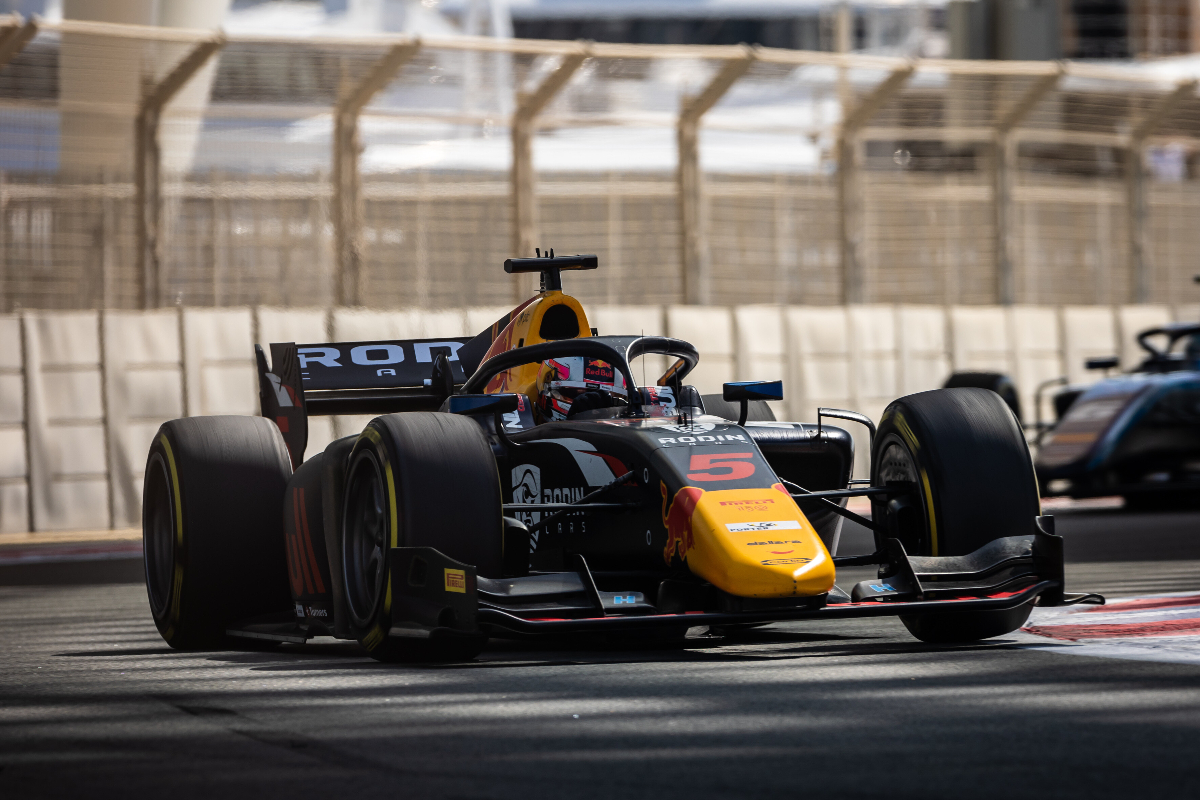 The Carlin driver took the lead midway through the 23-lap reversed grid sprint race and was unchallenged through the remainding laps while Richard Verschoor and Felipe Drugovich completed the podium behind him.

Racing was halted midway through the opening lap after a heavy crash for Enzo Fittipaldi and Jehan Daruvala.

The pair were running just outside the top 10 when Daruvala made contact with the rear of Fittipaldi’s car at turn three. Both drivers hit the barriers, and were able to climb out of the cars themselves but it caused a lengthy red flag stoppage.

The break would be a blessing for Logan Sargeant, who had a difficult opening lap but was moved back up to sixth place for the rolling restart.

It was a much calmer second start to the race. Trident’s Verschoor held the lead over Lawson and almost managed to pull out of DRS range before the system was enabled.

He couldn’t quite shake Lawson though, and he found a way through on lap 10. Verschoor tried to fight back with a move around the outside a few corners later but couldn’t quite make it stick.

Once ahead, Lawson pulled clear. In a quiet second half of the race, he built a gap of almost eight seconds for his fourth win of 2022.

Behind them it was a close battle for third. Amaury Cordeel surprised to hold the position for much of the race but came under attack from Drugovich late on. The Van Amersfoort driver couldn’t hold the champion off and slipped back into fourth.

Then Dennis Hauger took up the challenge. He made it past Cordeel late on, only to be told to give back the position for exceeding track limits as he did so. The Red Bull junior managed to hand back the position without slipping behind Sargeant or Jack Doohan, who were close behind, and then moved up the inside of Cordeel on the final lap to reclaim fourth from a driver whose tyres were aging quickly.

Cordeel did hold on to fifth though, his best F2 result, ahead of Sargeant and Doohan.

Roy Nissany finished eighth ahead of Theo Pourchaire, who had a strong opening lap and climbed forwards on the first start but was moved backwards after the race was red flagged. He couldn’t repeat the phenomenal start and had to settle for ninth, enough to provisionally secure second place in the championship.

Juan Manuel Correa finished 15th on-the-road on his F2 return with VAR, but recieved a five-second penalty post-race for causing a collision with Marino Sato during an aborted overtake. The penalty dropped him to 18th place.