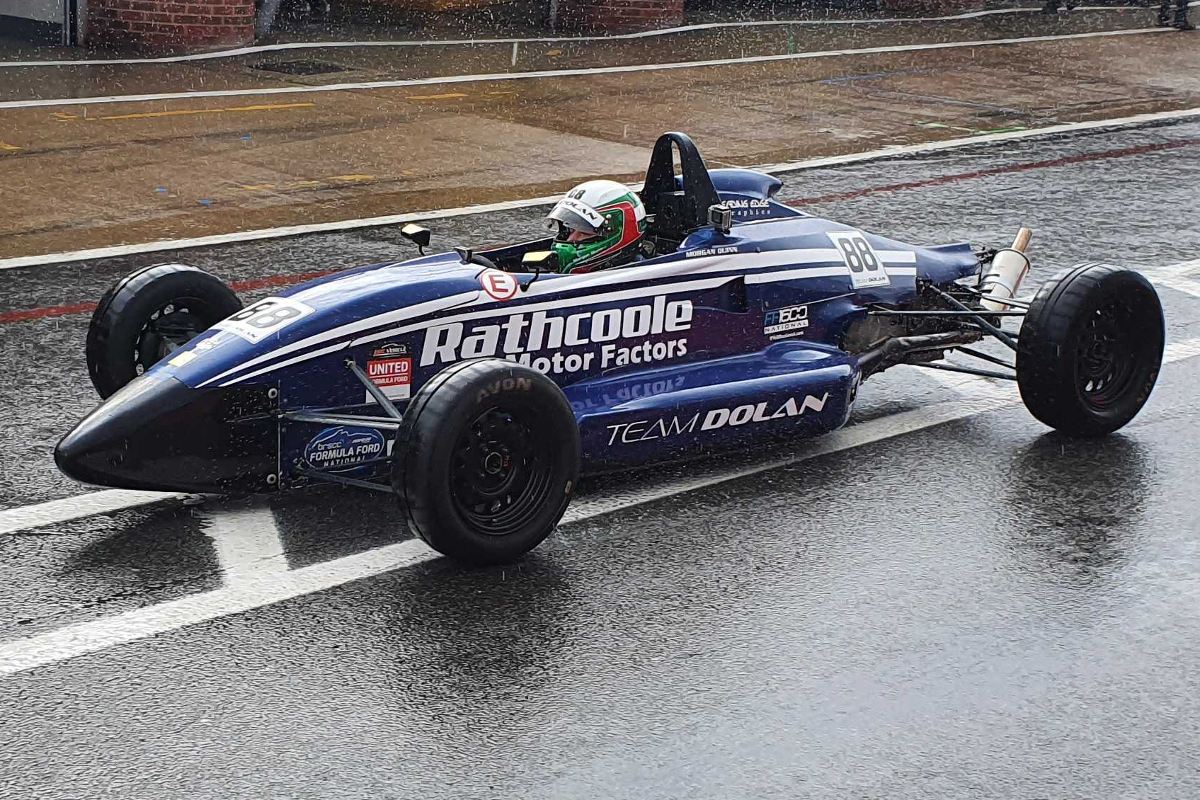 Pre-event championship leader Colin Queen (who was level on points with Quinn) was absent having flown home to the USA, with Matt Rivett unable to race due to destroying his car in a FFord Festival crash and Andre Lafond also not present.

PWR1 Racing’s Alex Walker moved ahead when qualifying restarted, then Quinn thrice set fastest lap. Walker unseated him, and he improved but then lost top spot to Romanek after he picked up a tow. Walker responded by snatching pole back next time by.

The contenders then pitted for adjustments before the final minutes. Quinn was quick to improve, lapping 0.017 seconds off Walker, but once Romanek got back up to pace he took pole by a quarter of a second and just before red flags appeared due to James Hadfield going off at Clearways.

It denied Walker a post-pitstop shot at pole, while Team Dolan’s Quinn [pictured above at the FFord Festival] and Jordan Kelly qualified third and fourth.

Romanek made a decent getaway in race one, while Walker’s clutch went and put him out of position at the start, earning him a 10s penalty.

He took the lead from Romanek on lap four of 24 down the inside at Paddock Hill Bend, but ran wide exiting it and Romanek got back through before Druids.

Romanek set fastest lap several times, but his lead only grew to 0.311s at its peak on lap 10 and just a few corners later Walker overtook him on the inside at Clearways.

The top three ran nose-to-tail thereon with Romanek never quite able to break Walker’s defences. Quinn “was holding station just to see if anything would happen” while thinking about the title, until a failed last lap move by Romanek at Paddock Hill left room for Quinn at Druids but the gap was “just not big enough” to pass.

Walker finished just 0.042s ahead of Romanek, but dropped to third, and Kelly was over 16s back in fourth.

“When I saw the penalty come up I knew there was no point massively fighting,” Romanek, now a three-time Champion of Brands, said. “Alex’s first time back in a long time, so was good to race him again. He was a bit too good on defending this time.”

FF1600 returnee Walker had “a really fun race” and was “happy to [win] on the road”, adding “I haven’t raced in a few months so it was really fun to get back into a proper scrap”.

Simon Hadfield ran fifth before a gravelly off and then retiring in the pits, while Adam Fathers crashed out at Clearways due to a suspected wheel hub failure that meant he missed race two, the Martin Down Trophy.

Romanek led lights-to-flag this time around, with Kelly briefly getting ahead of Walker on lap one for third while Romanek opened up an immediate 1.5s lead.

He “just managed to hold on” as that shrank to 0.29s by the finish, with Walker clearing Quinn for second on lap two and then setting consecutive fastest laps to close in on the leader.

“I put everything towards Lucas then but he did a really good job,” Walker said. “I made no mistakes, and just really good pace throughout. The backmarkers got a bit interesting!”

Lapping traffic was a challenge at times, as for Quinn in third. He came under intense pressure from Kelly mid-race, but said he was “kind enough to keep behind me” to secure him the title by one point.

Historic class driver Christopher Sharples retired but it was inconsequential as he had already wrapped up the year-long Champion of Brands title.