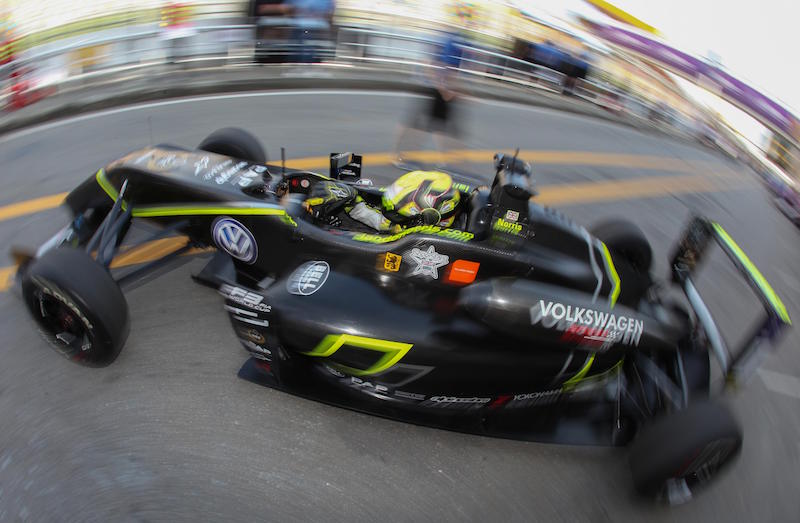 Lando Norris ended the opening day at the Macau Grand Prix by topping first qualifying for the FIA Formula 3 World Cup by nearly a second.

The European F3 champion, who was able to arrive in time to take part in Thursday morning’s practice session after all following the cancellation of his post-Brazilian Grand Prix tyre test with McLaren, held fifth place during a 50-minute delay for barrier repairs after a big crash for Sergio Sette Camara.

After the session finally restarted with 11 minutes left on the clock, Norris leapt to top spot with a 2m12.125s, one second faster than Maximilian Gunther’s benchmark from before the stoppage.

On his next lap, completed with two minutes remaining, Norris lowered his time to a 2m11.570s.

A fourth red flag of the session soon followed to bring an early end to proceedings after his Carlin team-mate Jehan Daruvala stopped after San Francisco.

Pedro Piquet produced a strong Thursday showing on his second visit to Macau, reminiscent of the great speed he displayed on the streets of the Norisring this summer.

After fourth place in practice, the Van Amersfoort Racing man held second during the lengthy pause and then reclaimed that position at the end with a lap 0.912 seconds slower than Norris.

That moved Gunther down to third position, despite a late improvement from the Prema driver, who recovered well from a gearbox issue in practice that limited his running and left him 19th on the timesheets.

Dan Ticktum shone throughout the day on his return to F3 competition a year after his promising Macau debut.

The Red Bull Junior had been third quickest in practice behind new Motopark team-mates Sette Camara and Joel Eriksson, having given the Swede a tow down Macau’s long straights.

In qualifying he edged Eriksson for fourth place as Motopark confirmed a return to form in Macau on Yokohama tyres after struggling in last year’s Pirelli-supplied event.

Formula 2 race winner and 2016 Macau podium finisher Sette Camara ended up ninth, having quickly leapt out of his car after going in rear-first to the Fisherman’s barrier.

There had been two briefer stoppages in the early stages of the session after crashes for Japanese F3 regulars Ryuji ‘Dragon’ Kumita and Alex Palou.

Carlin to return to F2 in 2018, Fortec and Charouz also set to join