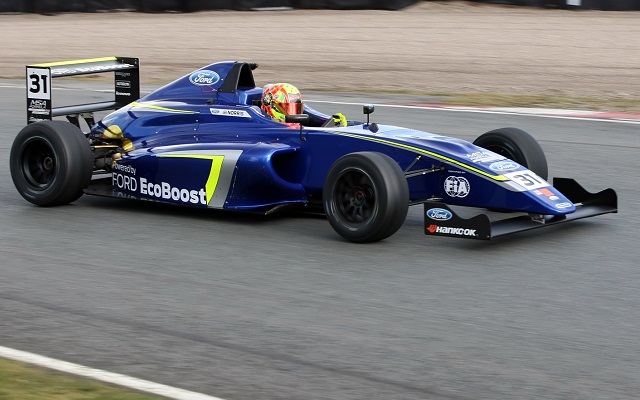 Lando Norris completed the first weekend of the new MSA Formula series by coming from behind to score his second victory.

Norris began on pole after getting the fastest second-best time in qualifying on Friday, but lost the lead off the line to fellow front row starter James Pull.

As in race two, the action was twice interrupted by the safety car, allowing for the cars of Gustavo Myasava and Jack Butel respectively to be retrieved.

At the second restart, Norris was able to challenge Pull and pass him at Druids. He quickly pulled a gap to the JTR driver and finished the race with a three-second margin.

Late entrant Jack Barlow completed a strong recovery from a first-lap retirement in race one to finish in fourth ahead of Dan Ticktum, who scored the worst result of his car racing debut with fifth. Race two winner Ricky Collard rounded out the top six.

Enaam Ahmed, Dan Baybutt and Rafa Martins were next up, with Sennan Fielding finishing tenth having earlier on fallen from fifth place with a trip wide at Clearways.