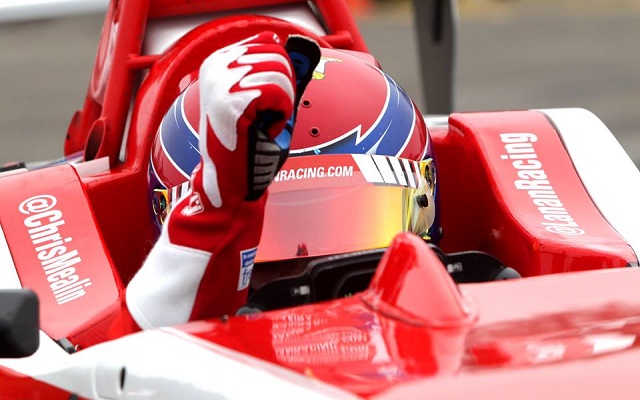 Lanan Racing’s Chris Mealin claimed his first victory in BRDC F4 in the second race of the season opener at Oulton Park.

Mealin led the whole duration of the race, successfully fending off attacks from Ecurie Ecosse’s Ciaran Haggerty on his way to victory.

The eventual winner was set to start second but gained a place even before the race began as poleman Sisa Ngebulana spun out on the formation lap and was sent to the back.

At the actual start, the leading duo of Mealin and Haggerty maintained position, while Jack Bartholomew slipped behind both Tom Jackson and race one winner Will Palmer.

Haggerty and Jackson stayed close behind the leader over the opening laps, but the Chris Dittmann Racing driver soon dropped off and was eventually passed by Palmer and Bartholomew.

However, the fighting did allow both Mealin and Haggerty to pull clear from the field – and the battle for victory was now between them alone.

The Scotsman stayed within half a second of Mealin for much of the race, but started dropping time in the latter stages of the race.

With the pressure off him, Mealin led the field to the checkered flag, with Haggerty settling for a maiden podium.

Palmer took third, ahead of Bartholomew and Jackson.

Harri Newey overtook Rodrigo Fonseca and Sebastian Lanzetti to claim sixth, with the South African holding off the Mexican for seventh.

Privateer Jack Lang was ninth, while Akhil Rabindra rounded out the top ten.