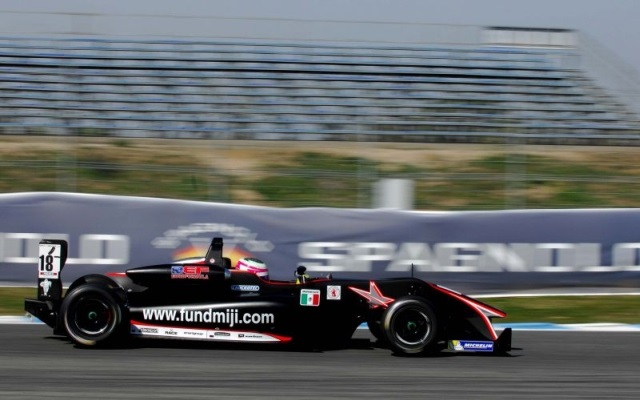 Luis Michael Dorrbecker has been announced as the third signing of Spanish outfit EmilioDeVillota in Euroformula Open’s 2015 season.

The 22-year-old Mexican took part in three out of the six days of the Euroformula Open Winter Series before signing up for the regular season.

Having raced in cars since 2008, Dorrbecker started his career by taking fourth in Formula Vee Mexico and second in the Skip Barber Southern Regional Series.

His first taste of racing in Europe came in 2010 for a single weekend in Formula Renault 2.0 Italy and he was a full-time entrant in the same series for the year after. With one podium finish at the Red Bull Ring, he ended up ninth in the standings.

Over the next two years the Mexican had part-time drives in Formula Renault 2.0 Alps and Formula Abarth.

Last season, he joined the FA1 series but had a troublesome campaign, finishing only half of the races and eventually taking ninth in the standings.

“We have worked so long and hard on this program and it is now when everything is set,” said Dorrbecker. “Our pre-season testing is short in comparison to my rivals. But I feel confident and will set my goals little by little.”

“We will have to make steady improvements and, working with my team, to achieve a podium finish is not out of reach. I would like to thank my sponsors for their support and the trust placed in me. This season is going to be a key one for my future in motorsport.”

Emilio de Villota Jr added: ?His arrival within the team means a step forward, both on a sports and technical level. Our friendship was cultivated four years ago but it is only now we have been able to put a program together.”

“His arrival with Interprotecci?n and entering the Telmex program in 2015 makes Luis Michael a Mexican motorsport reference on the international scene. His presence at Emilio de Villota Motorsport is good news for us.?

The 2015 edition of Euroformula Open is set to kick off this weekend at Jerez with 22-24 cars expected by the organizers.