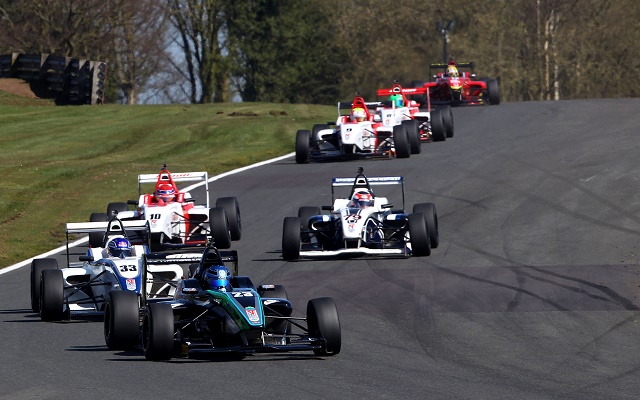 Sean Walkinshaw Racing’s Jordan Albert made amends for a tough start to his BRDC F4 campaign with a maiden win in race three.

One of the pre-season favorites, Albert had an off in qualifying on Saturday brought on by a mechanical issue and was resigned to the back for the first two races. However, after pitting on the formation lap in race two, he returned to the track and set the fastest lap in clean air to claim pole for the final race.

The SWR driver led off the line as fellow front row starter Harri Newey tumbled down the order over a hectic first lap, which also claimed race one podium finisher Sebastian Lanzetti.

As such, Ecurie Ecosse junior Ciaran Haggerty took over in second place, staying within half a second of Albert over the opening laps.

The duo enjoyed a pace advantage over race two winner Chris Mealin, who was too busy holding on to the final podium spot.

On lap five, Haggerty got as close to Albert as he’s been since the start, but the race leader maintained position.

The Scotsman did not give up and kept up the pressure, but ended up spinning on lap nine, falling back several seconds and leaving the leader in the clear.

As such, Albert was left cruising as he went on to claim not only his first win in single-seaters, but also SWR’s first BRDC F4 victory since September 2013.

Haggerty’s spin allowed Mealin to close in and subsequently pick off the Scotsman for second place. The Ecurie Ecosse driver then had another off, tumbling down to seventh.

As such, Rodrigo Fonseca joined teammate Mealin on the podium, leading Tom Jackson and Will Palmer, who retook fifth after losing two spots at the start. Jack Bartholomew was the third Lanan driver in the top six.

Zubair Hoque took eighth, ahead of a recovering Newey and Fernando Urrutia.