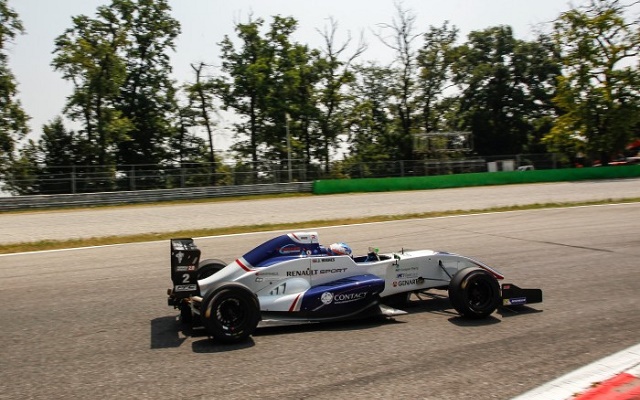 Jake Hughes survived a chaotic second race of Formula Renault 2.0 Alps’ Monza round to take his second win and emerge as the points leader.

Despite constant pressure from rivals, the Briton led every lap of the distance and won by less than three tenths.

JD Motorsport’s Matevos Isaakyan stayed with Hughes over the opening lap, trying to find a way past at Variante della Roggia but remaining second.

He was briefly into the lead after locking up and going over the kerbs in the first chicane, but naturally had to give the spot back.

By that point, however, another JD driver Thiago Vivacqua had caught up with the fight for the lead and nearly took advantage of Isaakyan slowing to steal second.

The duo ran right behind Hughes for the next few laps, albeit seemed more occupied with fighting each other than going for the lead.

Eventually, Vivacqua did find a way past his teammate and closed in massively on Hughes. However, the race was then neutralised under safety car when Denis Bulatov went off in the gravel.

Erstwhile points leader Jack Aitken, who fought up to fifth from 14th on the grid before the safety car, then pulled alongside Isaakyan.

The Russian attempted to force Aitken wide through Variante della Roggia and, with the Brit running out of room, the pair made contact.

Isaakyan rejoined in seventh place, while Aitken, having briefly went airborne after the collision, was out of the race.

Out front, Hughes continued to fend off Vivacqua, doing just enough to cross the line ahead of the Brazilian.

With Aitken drawing a blank, Hughes has cleared him by ten points in the standings, while Isaakyan, Vivacqua and Riener are now all within 31 points of the new leader.