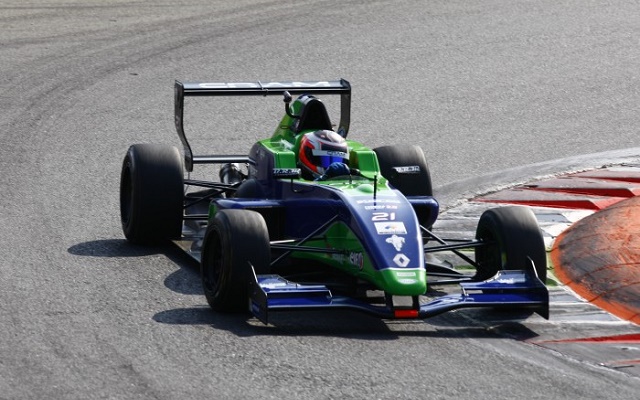 Romanov, who started in ninth place, stayed out of trouble and secured a comfortable win – Cram Motorsport’s first in the Alps championship.

With the top 12 from qualifying two reversed for this race, Philip Hamprecht held pole and tried to chop across front row starter Danyil Pronenko off the line, but had to yield to the BVM driver in the first chicane.

Meanwhile, mayhem unfolded behind them – Matevos Isaakyan moved over on Jake Hughes, leaving the Brit with nowhere to go, and got turned, collecting teammate Thiago Vivacqua as he spun out.

The safety car came out and the subsequent restart saw Pronenko and Hamprecht hold position. For third, however, an attempt from Ferdinand Habsburg saw the Fortec guest driver tap Denis Bulatov into the gravel at Variante del Rettifilo.

However, the real carnage would follow in Variante della Roggia, with several cars seemingly approaching the corner four-wide and causing a big pileup. Hughes, Habsburg, Matteo Ferrer and three other drives were forced into retirement, leaving the number of cars running on-track at just seven.

After another safety car period, Romanov took second off Hamprecht into the first chicane and quickly caught up with Pronenko, slipstreaming past the BVM driver on the main straight shortly thereafter.

Romanov would then bring the car home in first, with Pronenko picking up a maiden podium in second and Stefan Riener claiming third after Hamprecht incurred a drive-through.

Erstwhile points leader Jack Aitken did not take part as he required medical checks after his contact with Isaakyan in race two.