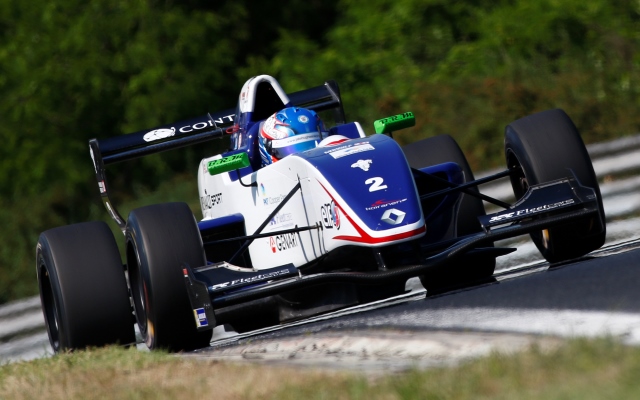 Eurocup Formula Renault 2.0 title contender Jake Hughes got his home round at Silverstone underway with the best time of Friday’s practice sessions.

The Briton, who sits second in the championship, got ahead of the Josef Kaufmann Racing pairing of Kevin Jorg and points leader Louis Deletraz late in the second session, setting a time of 1m57.708s and leading the Swiss duo by 0.119 and 0.231 seconds respectively.

Jorg and Deletraz had held second and third in the morning too behind Force India protege Jehan Daruvala, who led the way by more than four tenths at the start of his Eurocup series debut as a wildcard entry.

His time was more than a second slower than Hughes’ afternoon benchmark, though.

Hughes’ Koiranen team-mate Jack Aitken was fourth in the afternoon ahead of Anthoine Hubert and Ben Barnicoat.

Another wildcard entry Matteo Ferrer had been fourth in the morning ahead of O’Keeffe, Hughes and Barnicoat.